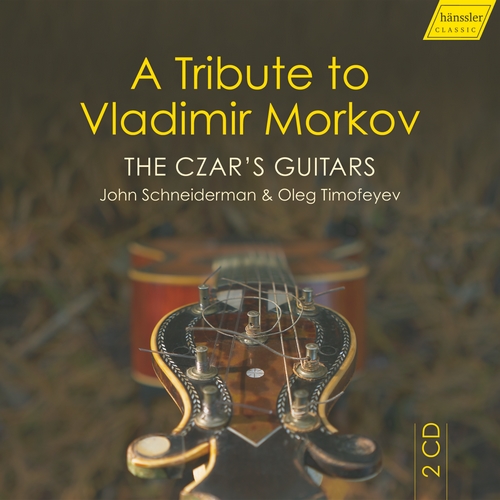 CD 1:
Variations on a theme from Bellini’s The Pirate
Fantasia from Glinka’s Life for the Tsar
Cavatina from Rossini’s The Barber of Seville
Andante from Rossini’s Othello
Variations on a theme from Bellini’s I Capuleti e i Montecchi
Angel (romance by Alexander Varlamov, 1801-1848)
Andante (from Piano Trio in F, op. 15 by Anton Rubenstein, 1829-94)
Tell Me Maiden song by Mikhail Glinka, 1804-1857)
Romance
Lyudmilla’s Aria from Glinka’s Ruslan and Lyudmilla
Variations on Carnival of Venice

Preludes for Two Guitars
The name of Vladimir Morkov (1801-1864) is known only to those Western listeners who have been following the recent revival of the Russian seven-string guitar. Morkov stands out as a musician, music critic, composer, arranger, and pedagogue of the highest order. The disappearance of the Russian seven-string guitar after the 1917 October Revolution let the world almost completely forget this exceptional scholar and artist

Most of the guitar duets on this CD come from Morkov’s manuscripts and two sets of partbooks from 1856 and 1858. Schneiderman had access to these master copies through a Russian friend respectively he discovered it by himself at the Moscow State Library.

The Czar’s Guitars consist of Oleg Timofeyev, the world’s renowned expert on the Russian guitar tradition and John Schneiderman, the acclaimed virtuoso of plucked instruments, especially of the Baroque lute, European and Russian guitars). Timofeyev was born in Moskow and lives in the U.S.A. since 1989. There he wrote his Ph.D. dissertation on the subject of the Russian seven-string guitar and recorded more than 20 CDs with it. Schneiderman was born near New York. He studied amongst others at the Schola Cantorum in Basel and is on the faculties of a whole number of American Universities and Conservatories.
Recorded at The Gustlin House and The Keyboard Dojo. Played on Russian guitar & Russian quart guitar.