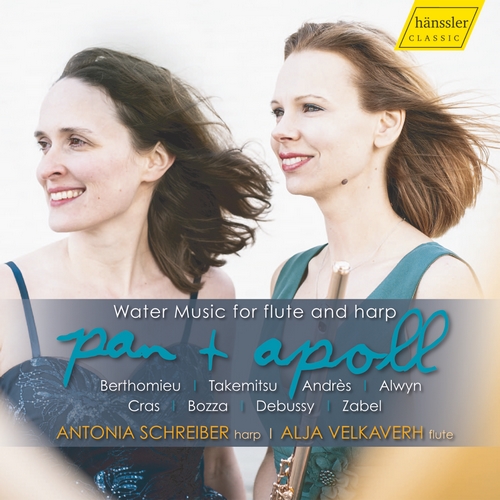 Toru Takemitsu:
Toward the Sea III for alto flute and harp

William Alwyn:
Naiades. Fantasy Sonata for flute and harp
All the compositions on this CD deal with water as the subject from different perspectives. Among them some works of wrongly lesser known composers, whom the listener will discover with surprise.

Slovenian flutist Alja Velkaverh began her studies at the Academy of Music in Ljubljana at the early age of 16. She was then accepted at the University of Music in Vienna and at the same time gained her masters in the Lorenzo Perosi Academy in Italy, studying with Peter-Lukas Graf. In 2006 began her professional path as principal flutist of the Bamberg Symphony Orchestra. In the following years she held principal flute positions with the Leipzig Gewandhaus Orchestra and the Stuttgart Philharmonic Orchestra, and has been principal flutist with the Gürzenich Orchestra in Cologne since 2010.
Recordings: April 8 – 10, 2020, Köln