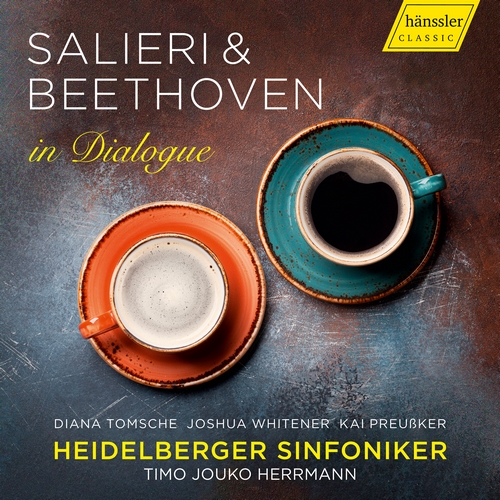 Ludwig van Beethoven:
Introduktion zu 'Vestas Feuer'
Terzett, Op. 116
“The pupil Beethoven was here!” – this sentence was written on a note in the house of Antonio Salieri, Kapellmeister to the Viennese court. The two musicians must first have met in the mid-1790s; Beethoven made his first appearance as a soloist in Vienna in March 1795 with a piano concerto of his own that Salieri conducted. He was already known as a virtuoso and instrumental composer, but had yet to make his mark in the prestigious genre of opera. Salieri for his part was Vienna‘s unchallenged authority on the subject and had been so for decades. Beethoven thanked Salieri for his generosity by dedicating his op. 12 Violin Sonatas to him and by composing a set of variations on a Duettino from Salieri‘s opera Falstaff ossia Le tre burle.

The Heidelberg Symphony Orchestra put its main emphasis is on the Viennese Classical era and the early German Romantics, alongside an intensive involvement with the works of the Mannheim School and the pre-Classical period. The orchestra‘s interpretative style was essentially shaped in a course of historical performance practice with Nikolaus Harnoncourt and refined in rehearsal work with its former conductor Thomas Fey. Timo Jouko Herrmann is considered one of the few internationally acknowledged Salieri researchers. His major musicological publications about Salieri are viewed as standard works on the life and work of the composer.
Recording: March 2020, Martin-Luther-Haus, Dossenheim