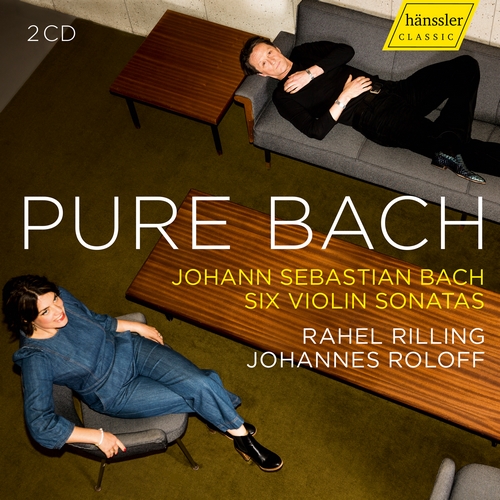 CD 2:
Sonata in C minor, BWV 1017
Sonata in F minor, BWV 1018
Sonata in G major, BWV 1019
The “Sei Suonate a Cembalo certato e Violino Solo”, as Bach’s six Sonatas for Violin and Harpsichord (BWV 1014–1019) are entitled in the oldest surviving fair copy, are undoubtedly among those works which have set new standards in chamber music. They have long established themselves on the world’s concert platforms. In all, Bach in his set of six sonatas exploits the full potential of Baroque formal language, casting new light upon it. These Sonatas delicately open the door to a new era of chamber music – to the galant style of Johann Joachim Quantz, say, or Johann Stamitz – and remain to this day a proving-ground of approaches to the construction and expression of musical ideas.

Rahel Rilling, born in Stuttgart in 1976, is a versatile, internationally sought-after artist. She comes from a celebrated family of musicians and was given her first violin lessons when she was four. Her father is Helmuth Rilling, the conductor and Bach specialist. Even in her youth, she was playing as a violinist on many of his concert tours, in programmes that made Bach’s music better known all over the world. Rahel Rilling plays a violin built by Tomaso Balestrieri, Cremona, in 1767.

Born in Berlin in 1957, Johannes Roloff was given his first piano lessons by his mother when he was six. He studied piano in Berlin and Munich between 1977 and 1983. Since 1983, he has been living and working in Berlin.
Rahel Rilling plays a violin built by Tomaso Balestrieri, Cremona, in 1767. Piano: Steinway.