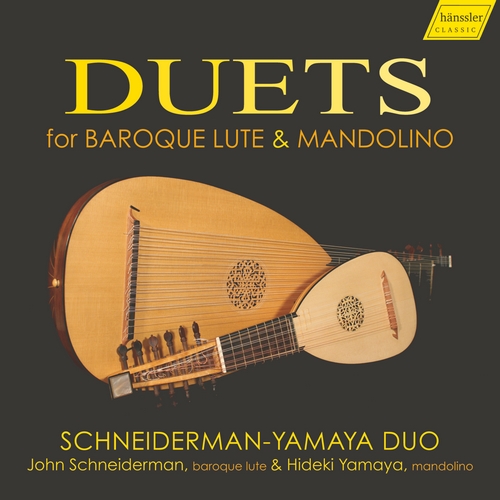 Silvius Leopold Weiss:
Sonata in G Minor - Ciacona
After enjoying several centuries of sustained popularity and relevance in European musical life,the lute family of instruments was undeniably falling out of prominence by the end of the 17th-century. There were, of course, exceptions: most notable of which are the baroque lute in Central and Eastern Europe, and the baroque mandolino in Italy.

What we call baroque lute today, the 11- or 13-course lute in its idiomatic D minor tuning, was developed in France in early 17th-century. The mandolino in Italy was given a tuning of mostly fourths, similar to that of lute in Renaissance tuning. There is no known music for both instruments together. A strong case could be made for their pairing today. First, they complement each other range-wise. Second, they are a good match texturally and dynamically.

Critically acclaimed virtuoso of plucked instruments since age nine, John Schneiderman specializes in the performance practice and repertoire of eighteenth-century lutes and nineteenth-century guitars. Hideki Yamaya is a performer of lutes, early guitars, and early mandolins based in Connecticut. USA.
Recorded at the Keyboard Dojo.