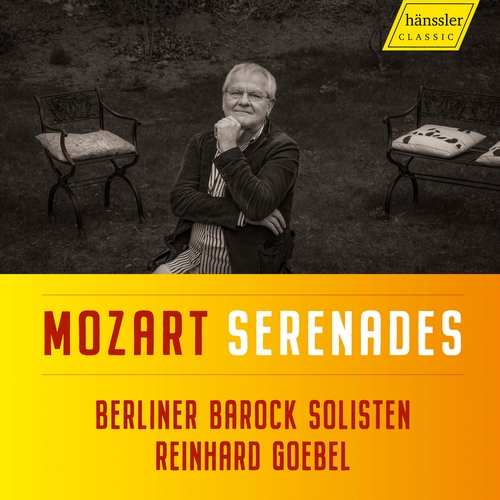 „Serenata Notturna“ Serenade for strings and timpani in D major, KV 239
Adagio & Allegro for a mechanical organ in a performing clock in F minor, KV 594
„Adagio & Fugue for strings in C minor, KV 546
„Eine kleine Nachtmusik“ Serenade for strings in G major, KV 525 (including a Minuet before the Romance by Thomas Attwood, corrected and enlarged by W. A. Mozart 1791)
Like almost all Mozart’s Serenades, then, his Nachtmusik K525 had two minuets, of which the first had already vanished by the time the first printed edition appeared as late as 1827. Far behind Eine kleine Nachtmusik in popularity comes the Serenata notturna composed in 1776 in Salzburg. Complete with the Adagio & Fugue in C minor K426/546, then, the present CD thus contains the sum of Mozart’s original compositions for string choirs, that is, works scored for multiple strings

Die Berliner Barock Solisten ensemble was founded in 1995 by Rainer Kussmaul, Raimar Orlovsky, and other members of the Berlin Philharmonic, alongside early music specialists. Their aim was to present high-level performances of early music on modern instruments. This concept does not contradict the idea of historical performance practice. The size of the ensemble varies according to the requirements of each programme.

Reinhard Goebel specialises in the repertoire of the 17th and 18th centuries; As an expounder of period performance practice for both early music ensembles and modern orchestras, and as an endless fount of knowledge about gems of the repertoire, he is a worldrenowned specialist. In May 2018 he was named artistic director of the Berliner Barock Solisten.
Recording: January 25-28, 2021, Philharmonie Berlin, Kammermusiksaal.