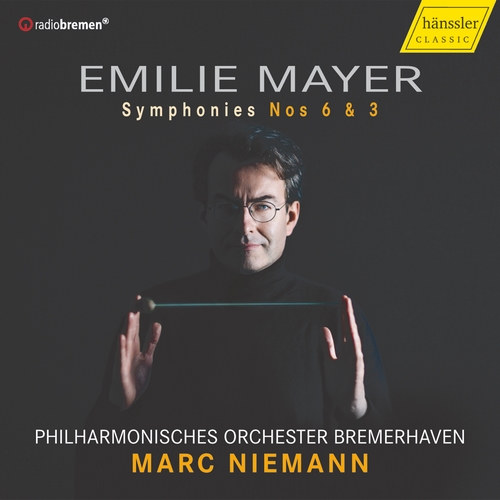 Sinfonie Nr. 6 E-Dur
Sinfonie Nr. 3 C-Dur „Sinfonie militaire“
The long overdue rediscovery of Emilie Mayer naturally earns her the near-universal label of “female Beethoven”, which she was called even by her contemporaries. On the one hand that is a great honour, for Mayer is indeed considered the most successful symphonist among the composing women of the Romantic era. She was thus not content with the “domestic”genres of Lieder, piano works and chamber music, which is all that her female colleagues were generally allowed; on the contrary, she designed symphonies on the grand scale. On the other hand, that label shows that people are still thinking along gender-specific lines – even if they have happily escaped the 19th-century mindset that hampered Emilie Mayer’s own career.

As late as 1878, the “Neue Berliner Musikzeitung” was describing her as a “rare phenomenon” and an “exception” to the rule that the “Production” of orchestral works was solely the “Domain of the creative male intellect”. By that date, Emilie Mayer had already presented eight symphonies. And in 1850, almost 30 years earlier, a critic had exclaimed in the same paper: “Hitherto woman’s fair hand has mastered the Lied at most (…). What female powers, powers of the second rank, can attain – that is what Emilie Mayer has achieved and reproduced.”
Recording: 04-06.10.2021, Sendesaal Bremen.