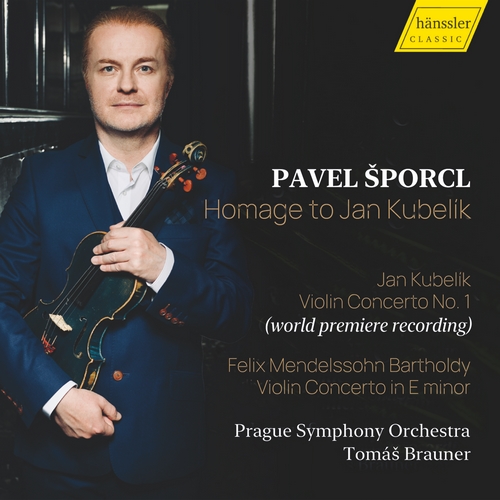 Felix Mendelssohn Bartholdy:
Violin Concerto in E minor, Op. 64
Kubelík’s star began to wane in the years before World War I. Some felt he had gone off the boil but it was more a question of his public turning to new idols, Elman and Vecsey. In 1915 he retired to take composition seriously, not resuming his concert career until 1920. He toured Britain 20 times from 1900 to 1934 (packing the Royal Albert Hall with 7,000 people in 1926) and the U.S. many times up to 1938 (6,000 heard him at the New York Hippodrome in 1920-21). He commanded a wide range of music and in Central Europe he is remembered as a great musician. He died in Prague on 5 December 1940.

The main fruits of Kubelík’s five-year break were his first three Violin Concertos, published in Prague in 1920. Of the eventual series of six, Pavel Šporcl says: ‘They are technically very demanding and musically extremely interesting.’ The First Concerto in C major, which he plays here, is a melodious Late Romantic work, well tailored to a front-line virtuoso’s strengths, and it should not have fallen out of the repertoire. Kubelík emerged from his purdah to premiere it at the Grosse Musikvereinssaal in Vienna on 29 January 1917, Nedbal conducting the Tonkünstler Orchestra.
Recording: Municipal House - Smetana Hall, Prague, 8, 10 & 11 January 2022 (Kubelik), 8 & 9 March 2022 (Mendelssohn).