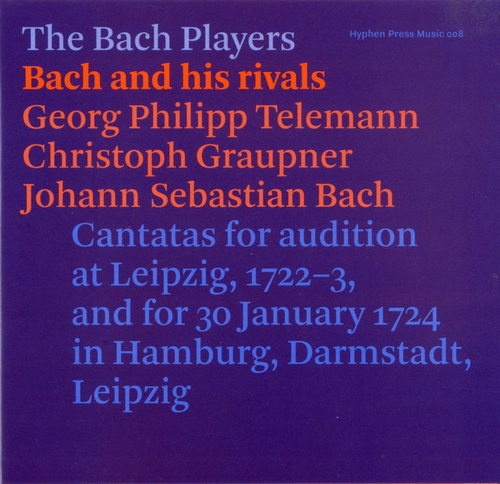 Graupner / Telemann: Bach and His Rivals

J.S. Bach:
Cantata ‘Jesus nahm zu sich die Zwölfe’, BWV 22
Cantata ‘Jesus schläft, was soll ich hoffen’, BWV 81
This double CD presents two sets of cantatas by three composers: Telemann, Graupner, and J.S. Bach. The first disc has cantatas composed in 1722–3 as audition pieces for the job of Kantor at the Thomasschule in Leipzig. Both Telemann and Graupner were attractive and likely candidates, as these works prove. Bach – despite his subsequent glory – was the outsider. The second disc gives us cantatas by the same three composers a year later, composed for the same Sunday, 30 January 1724. The gospel reading for that day tells the story of Jesus stilling the storm at sea: the music reaches dramatic heights. These cantatas, with the addition of instrumental works by Telemann and Graupner, paint a substantial picture of music in Germany at that moment.