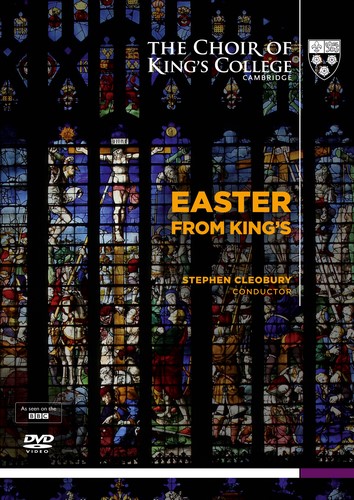 Wykonawcy
The Choir of King’s College Cambridge / Stephen Cleobury
Easter at King’s is the first DVD release of the regular BBC broadcast, which forms a cornerstone of the BBC’s Easter programming. This service was first broadcast at Easter 2014 from the College’s awe-inspiring Chapel.

Featuring seasonal hymns and readings alongside choral favourites, including Allegri’s Miserere, the Lacrimosa from Mozart’s Requiem, the Hallelujah Chorus from Handel’s Messiah and Cesar Frank’s Panis Angelicus, this collection presents a contemplation of Christ’s death and resurrection.

This world-famous choir is perhaps best-known for its Christmas broadcasts, but gives daily sung services in the beautiful surroundings of King’s College Chapel. Cameras are normally forbidden during services, so this DVD provides a rare opportunity to experience the choir engaged in its core activity, celebrating the most important festival of the Christian calendar.

Booklet with notes in English and a reproduction of the original service booklet with hymn texts.

The DVD’s release will be accompanied by an extensive international press and marketing campaign.

The Choir of King’s College, Cambridge is one of the world’s foremost choirs and unquestionably among the most widely heard. It owes its existence to King Henry VI, who envisaged the daily singing of services in his magnificent chapel. This remains the Choir’s raison d’etre, and is an important part of the lives of its 16 choristers, who are educated at King’s College School, and the 14 choral scholars and two organ scholars, who study a variety of subjects in the College. The Choir has produced numerous professional singers including James Gilchrist, Christopher Purves and Gerald Finley.
The Chapel of King’s College, Cambridge; 13-15th December, 2013