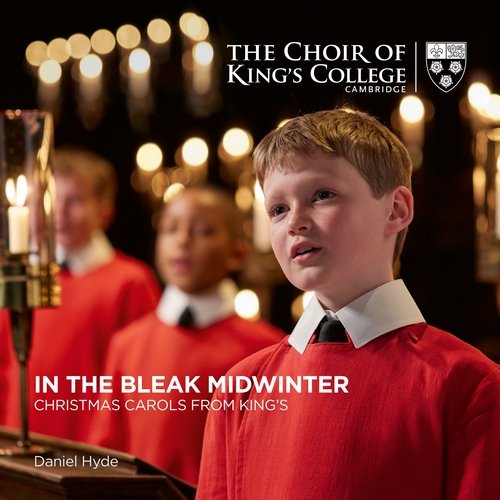 In The Bleak Midwinter

Once in royal David’s city
A tender shoot
How shall I fi tly meet thee?
In the bleak midwinter
Of the Father’s heart begotten
Angels, from the realms of glory
An Old Carol (I sing of a maiden)
In dulci jubilo
The angel Gabriel
O come, all ye faithful
Sussex Carol (On Christmas night)
While shepherds watched their fl ocks by night
Thou who wast rich beyond all splendour
The Shepherd’s Cradle Song (Wiegenlied)
In the bleak midwinter
As I sat on a sunny bank (I saw three ships)
Still, still, still
Prelude to ‘Hark! the herald angels sing’
Hark! the herald angels sing
Improvisation on Adeste, fi deles
In the Bleak Midwinter reflects a Christmas that was unlike any other in recent history. Much of the music on this album was heard around the world as part of the 103rd Festival of Nine Lessons and Carols, a service that has been broadcast live every year since 1930.

But for Christmas Eve 2020, the continuation of this uniquely long-running tradition was not to be. A full service, with lessons, carols, organ voluntaries and prayers, had been recorded in an empty Chapel for use in the event that a live broadcast became impossible, and it was this that was called upon just days before Christmas Eve. For its millions of listeners, the broadcast meant the continuation of a Christmas tradition in a year when so many were without their friends and family, and without so much of what makes Christmas special.

Music from Christmas Eve is supplemented on this album by a selection of specially recorded tracks. It marks not only a moment of light in a time of considerable darkness for so many, but the beginning of a new era for the Choir of King’s College under the direction of Daniel Hyde, with this his first full album at King’s since his appointment in 2019.
All of these tracks were broadcast as part of A Festival of Nine Lessons and Carols on Christmas Eve, December 2020, with the exception of tracks 6, 7, 13 and 15, which were recorded subsequently.