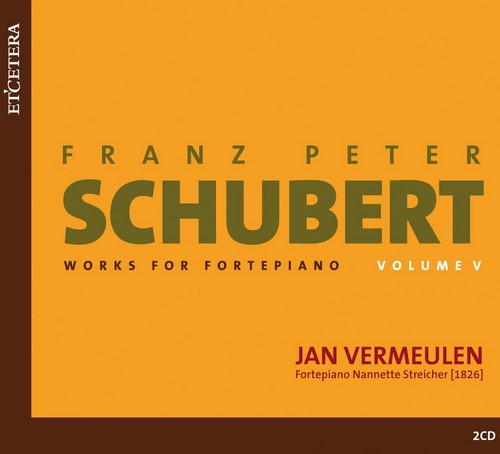 Etcetera - KTC 1334
Kompozytor
Franz Schubert (1797-1828)
Wykonawcy
Jan Vermeulen, piano
Fantasie in C major - Wanderer D760
Zwölf Deutsche Tänze - genannt Lädler D790
Sonata in E minor D566/506
Sechsunddreissig Originaltänze, genannt Erste Walzer D365
Sonata in E major D157
A miraculous find in the castle Vilain XIIII in Leut resulted in a wonderfully ambitious project: the recording of the Schubert’s complete piano works on an original Nannette Streicher fortepiano from 1826. Given that there are only a dozen or so of these instruments known to exist worldwide – many are shut away in museums and so not playable- this is a truly unique project. The Vilain XIIII’s six-octave straight-strung Streicher has an intimate sound with precise articulation and a transparent bass register that is perfectly suited to the music of the Viennese early Romantics - Beethoven and especially Schubert. With this release, Etcetera begins a new series of six 2CD sets in which Jan Vermeulen will reveal for us a new and groundbreaking Schubert sound. Fortepianist Jan Vermeulen studied in Brussels with André de Groote. He then began an impressive career as a soloist and chamber musician in Belgium, as well as abroad. His performances are marked by a constant search for authenticity with historically grounded and well-considered interpretations of the classical, romantic and impressionist repertoire. To this end, he performs piano music on period instruments, mainly from his own private collection. He is a member of The Tröndlin Ensemble and works with Paul Dombrecht,Wieland Kuijken, Florian Heyerick and a wide range of vocal artists, such as soprano Anne Cambier