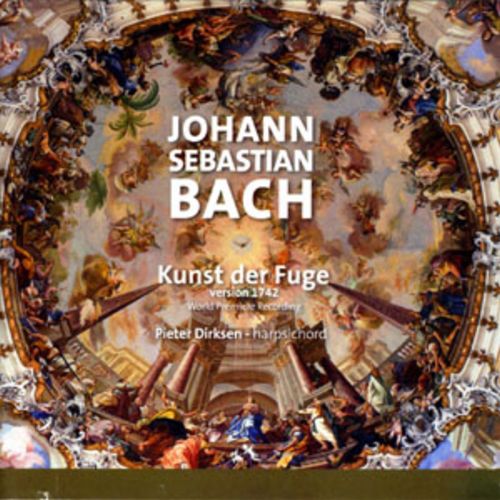 Die Kunst der Fugue:
First Version (ca.) 1742:
reconstruction - Pieter Dirksen
This disc by Dutch harpsichordist Pieter Dirksen represents the musical realization of scholarly investigations that are speculative in nature and are for the most part alluded to rather than presented in the booklet. It's not a good choice for a first-time purchase of this monument of Bach's last years, but the Kunst der Fuge, or Art of Fugue, is a notorious mystery, and Dirksen's entry in the solution sweepstakes is notable for its boldness and for its strong correspondence between speculative reconstruction and convincing musical realization. The work that led Dirksen to his conclusions involved arcane matters of handwriting analysis and the vastly inexact science of watermark studies (a watermark is a pattern, sometimes barely visible, woven into paper by its manufaturer). His proposals, however, draw equally on musical considerations. Briefly, he asserts that the Kunst der Fuge went through several stages in which Bach's conception of the work changed. According to Dirksen, it was not the swan song it is often portrayed as being; although the 1751 publication of the work included one unfinished fugue (a mystery in itself), he believes that Bach began the work in 1742 and completed a version, now lost, that included 12 fugues and canons. This 12-part version is reconstructed here, based on examination of a Berlin manuscript version of the work in which Bach appears to have gone in and made changes later, and based on an ordering of the existing music that, although it diverges considerably from the 1751 version and from the manuscript (from around 1747), makes sense in Dirksen's version: it has a clear progression from simple to complex, and it, like other late Bach keyboard works, introduces its second half with a piece in French style. Why would Bach reorder the music in this way? Dirksen's answer is that his 1742 Art of Fugue was intended as a coherent performance entity, a concert work, while Bach later revised the work with an eye to publication, creating a version that wasn't intended to be played straight through but instead represented a compendium of fugal technique. In 1747, Dirksen hypothesizes, Bach began adding music, and the new pieces were real intellectual marvels -- the four mirror fugues, and the retrograde-augmentation canon that usually comes 17th in the ordering. Mirror fugues are pairs of fugues that consist, in their entirety, of inversions of each other -- where one voice of one fugue goes up, its opposite number in the second fugue goes down by the same interval. Needless to say, this was quite a feat, and the 1751 version, representing Bach's final (or as final as he could make it at the time) thinking on the matter, apparently includes still deeper patterns. Dirksen's evidence is circumstantial, but his recording is musically compelling (the mirror fugues in particular are very difficult for one player to realize), and his ideas offer a way for the general listener to begin wrestling with the complexities of the Art of Fugue and its structure.
WORLD PREMIERE RECORDING