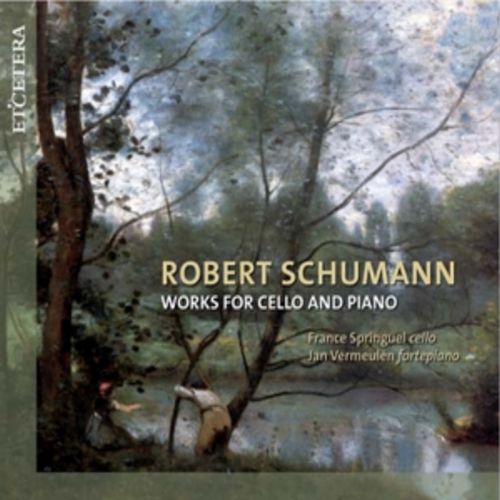 Schumann: Works for Cello and Piano

Etcetera - KTC 1441
Kompozytor
Robert Schumann (1810-1856)
Wykonawcy
France Springuel, cello
Jan Vermeulen, fortepiano
Märchenbilder op. 113
Fünf Stücke im Volkston op. 102
Fantasiestücke op. 73
Drei Romanzen op. 94
Adagio und Allegro op. 70
A mere glance at Robert Schumann’s (1810-1856) catalogue of works tells us that as a composer he was subject to whims. As such, the first decade of his existence as a composer was almost exclusively dedicated to piano music. In 1840, he threw himself into the song repertoire, 1841 became the year of the symphony and 1842 the year of chamber music. The following years Schumann was troubled by an unstable physical and mental condition. However, in 1849 he had enough energy for a genuine compositional outburst. “This is my most fertile year’, the composer himself described the year 1849. Except for the Märchenbilder opus 113 (from 1851), all works on the CD were composed in 1849.

The revolutionary violence in Dresden in 1849 drove the Schumanns towards the countryside for a while. Also in the works he composed that year Schumann searches for an intimate atmosphere. It is said he wanted his chamber music compositions for original instrumentation to be a counterbalance for increasing dullness. Schumann also provided for alternative instruments for most of the chamber music works on this recording. Therefore, the Adagio and Allegro for horn and fortepiano opus 70 can also be performed on violoncello or violin. The composer’s openness is also evident in the Drei Fantasiestücke opus 73 (fortepiano and clarinet, violin or violoncello), The Drei Romanzen opus 94 (fortepiano and oboe, violin or clarinet), the Fünf Stücke im Volkston opus 102 (fortepiano and violoncello or violin) and the Märchenbilder opus 113 (fortepiano and violin or viola). Entirely in line with this flexible way of dealing with instrumentation, France Springuel and Jan Vermeulen decided also to perform the Drei Romanzen and the Märchenbilder on violoncello and fortepiano.