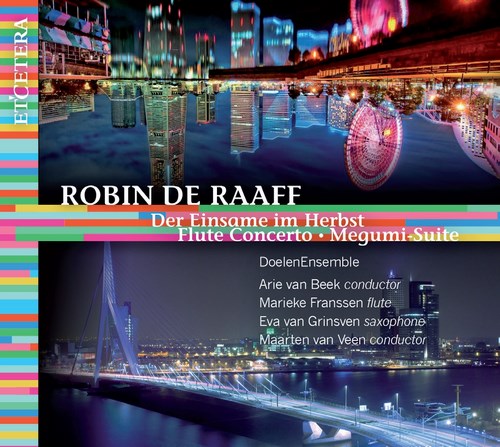 Etcetera - KTC 1525
Kompozytor
Robin de Raaff (ur. 1968)
Wykonawcy
Marieke Franssen, flute
Eva van Grinsven, saxophone
DoelenEnsemble / Arie van Beek, Maarten van Veen
Flute Concerto
Megumi-Suite
Robin de Raaff (Breda, 1968) discovered his own diverse musical world through playing classical piano as well as bass guitar as a young teenager. After being introduced to the legend and legacy of Jaco Pastorius, De Raaff’s musical world expended explosively as an instrumentalist. Parallel with this early development, De Raaff also created his own music and lyrics for his Band where instrumental sections grew in significance, ultimately in to completely written out instrumental works. Those composed works led him to enrol as a student of composition. De Raaff is of the generation of Dutch composers emerging in the nineties. He first studied composition with Geert van Keulen and later at the Amsterdam Conservatory with Theo Loevendie, graduating cum laude in 1997. In 1999 De Raaff had the special privilege of being invited to work as George Benjamin’s only composition student at the Royal College of Music in London where he also studied with Julian Anderson. In 2000 De Raaff was invited to the renowned Tanglewood Music Center as the ‘Senior Composition Fellow’ which was the beginning of an ongoing relationship resulting in a series of commissions (Piano Concerto for the Festival of Contemporary Music and Entangled Tales for the Boston Symphony Orchestra) and performances of his septet Ennea’s Domein and Un Visage d’Emprunt For 2015 De Raaff was commissioned to compose a Fanfare dedicated to the 75th Anniversary of the Tanglewood Music Center. His residency at Tanglewood in 2000 was the beginning of a bigger exposure with performances and residencies in North America through festivals such as, The Aspen Music Festival, Cabrillo Festival (Santa Cruz), The Banff Center, Lincoln Center (New York).