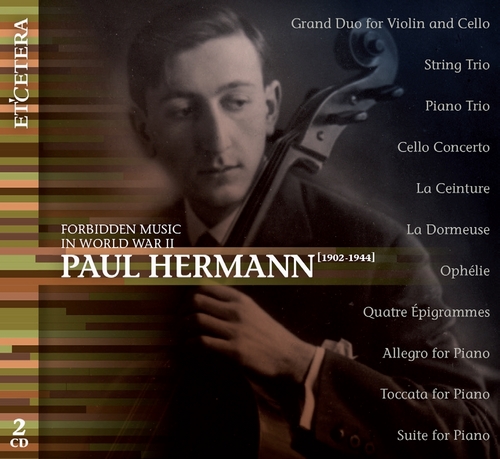 CD 2:
Songs
Quatre Épigrammes
Allegro for Piano
Toccata for Piano
Suite for Piano
In the twenties and thirties of the twentieth century, Paul Hermann performed as a cellist in major concert halls in London, Paris, Amsterdam and Berlin. He programmed music by his friends Bartók and Kodály, but also introduced his own compositions. Closely involved in the Dutch classical music scene as a result of his marriage to Ada Weevers, he also championed the music of Dutch contemporaries. Being a Hungarian Jew, he was arrested in Toulouse in 1944 and deported, never to return. His compositions – kept safe by the Weevers family – remained hidden. Thanks to Paul Hermann’s daughter Cornelia, the Leo Smit Foundation was able to programme his music again for the first time in 2009. The Grand Duo for violin and cello turned out to be fascinating music, deserving a broader audience.

Paul Hermann studied cello (with Adolf Schiffer) and composition (with Leo Weiner and Zoltán Kodály) in Budapest. His international breakthrough as a cellist came at a concert of the International Society of Contemporary Music in Vienna, when he performed Kodály’s Sonata for cello solo. To escape the anti-Semitic reign of terror of Admiral Horthy, Hermann emigrated to Berlin around 1925. He continued his studies with Hugo Becker and composed a Cello Concerto. With his friend violinist Zoltán Székely he toured Europe. For a concert at Wigmore Hall, he composed his Grand Duo. When Hitler seized power in 1933, Paul Hermann and his young wife Ada Weevers decided to stay in the Netherlands. In the autumn of that year, Ada died and Paul relocated to Brussels and Paris. When the war broke out, he signed up as a foreign volunteer with the French army. His regiment fought at the front lines north of Paris. After the French surrendered, Paul Hermann went into hiding with Ada’s family. In a street raid in Toulouse he was arrested and sent to Auschwitz. His transport was sent on to Lithuania and Hermann never returned.

Although Paul Hermann earned his living as a cellist, composing was equally important to him. Starting as a student, he continued composing until weeks before his death. His output includes works for strings, for piano solo, songs and orchestral compositions. With great success, he managed to combine the classical tradition with modern insights; his work represents the musical development of the early twentieth century. His compositions are neoclassical in form, playing with the boundaries of tonality. Paul Hermann was a serious composer with a great depth of ideas, but also a great sense of humour. His Hungarian background is unmistakable, building on the ideas of his teachers Kodály and Bartók.
CD 1 - Tracks 1-3 recorded at Berlin NaturTonStudio; November 21, 2016, Track 4 live recording at Splendor Amsterdam; December 12, 2016, Track 5 live recording at Splendor Amsterdam; April 11, 2016, Track 6 Live recording May 13, 2016, Thayer Hall