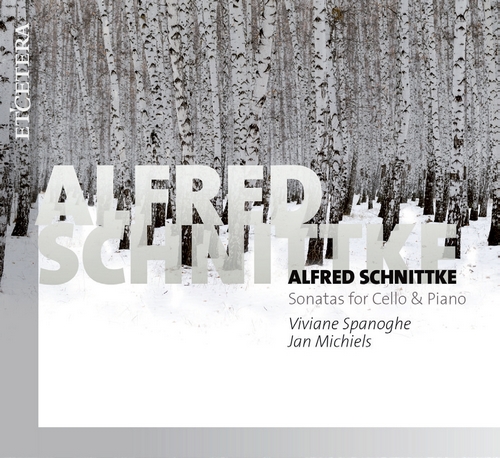 Sonata for cello and piano
Klingende Buchstaben
Madrigal in memoriam Oleg Kagan
Improvisation for cello solo
Sonata No.2 for cello and piano
Alfred Schnittke was born in the city of Engels, at that time the capital city of the autonomous Volga Republic in the Soviet Union. His family had German, Russian, Jewish and Catholic roots and he spent part of his early childhood in Vienna. The greatest part of his life was spent in Russia, where as a child he had participated in historical events of international importance that marked him deeply. He settled finally in Hamburg in 1990.

Heavily influenced by Mahler, Berg, and Shostakovich (his teacher) amongst others, Schnittke often also quoted from composers such as Lassus, Bach, and Mozart, making connections with forms from the past such as the concerto grosso, the waltz and the passacaglia; he employed a mix of styles and techniques, including Russian Orthodox, folk music, Russian nationalist music, contemporary, tonal, atonal, and microtonal, in order to bridge the gap between the present and the past in works with a spiritual, ironic or expressionist slant.

Although he was a controversial and much criticised figure he was boycotted by the Union of Soviet Composers Schnittke was defended by such great musicians as Gennadi Rozhdestvenky, Gidon Kremer, Oleg Kagan, Yuri Bashmet, Mstislav Rostropovich, Alexander Ivashkin, Natalia Gutman and the Borodin Quartet, who performed his works in Russia and abroad.