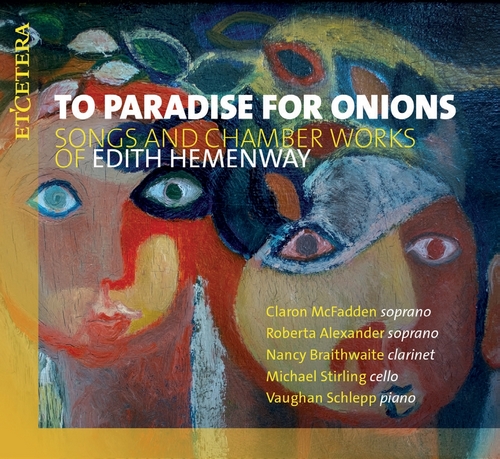 Hemenway: To Paradise For Onions

Doors - Three Poems by W.S. Merwin for soprano, clarinet, cello and piano
Questions of Travel
To Paradise for Onions
A Child’s Garden
Asian Figures
Four Poems of Langston Hughes
Edith Hemenway (nee Fitz) was born in 1926 in Brookline, Massachusetts, where she studied piano as a child with the talented French wife of E. Power Biggs. In 1946, she married Augustus L. Hemenway and together they graduated from McGill University, where she majored in English Literature. They moved to California, where her husband attended Divinity school and was made rector of the Good Samaritan Church in San Francisco. With a growing family (there would eventually be eight children), she started taking organ lessons with Harold Mueller, her first important musical influence, and immersed herself in the works especially of J.S. Bach. The organ was her principal instrument for several years until she discovered the joys of the art song.

The family moved to Providence, Rhode Island in 1962, and there she became studio accompanist to David Laurent, a well- known bassbaritone who was active at Brown University. Here she developed her love of the art-song literature, and soon began studies at the New England Conservatory of Music, where she received a Master’s degree in Vocal Accompaniment. Shortly thereafter, she earned an M.A. from Brown University in musical composition. Since then, her attention has been divided between performing, coaching, and composition. The Boston Children’s Opera Company, since defunct, commissioned two operas, Benny and the Bear, performed in schools throughout New England, and The Twilight of Magic. The latter premiered at The Third Street Music School Settlement in New York, and was then performed by Opera on the Go as part of their traveling repertoire. Goldilocks, another opera for young children, was also commissioned and performed by this group. The librettos for these three operas were written by her daughter Sarah. A fourth opera, Doctor Know-It-All, conceived for an older audience and involving a larger cast, was performed by voice students at the University of Rhode Island. During this period, Ms. Hemenway also received two Composer-in-Residence grants. While on a two-year stint in Savannah, Georgia, she became friendly with Nancy Braithwaite, and composed two works for her: Asian Figures and A Child’s Garden. Other widely performed works by Ms. Hemenway have been the works song-cycle Wonderings on poems by Kenneth Patchen, and the popular Four Duets on Poems by Langston Hughes. Several other song-cycles and chamber works have been premiered by Nancy Braithwaite and her ensembles in The Netherlands including ‘Questions of Travel’ and ‘Doors’.