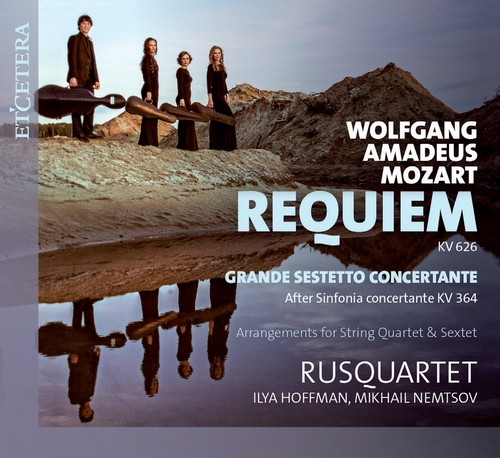 The Requiem in d minor KV 626 was conceived by Mozart for four vocal soloists, chorus and orchestra. He began composing it in 1791. When he died in December of that year, the Requiem remained unfinished. It was completed and edited by Franz Xaver Süssmayr. This version was first published in 1800. Probably only a few years later- some sources suggest as early as 1802- the physician/composer/music publicist Peter Lichtenthal (1780-1853) used this score when he arranged the Requiem for string quartet. His daring arrangement, omitting the vocal soloists and chorus and thus also the words of the Mass for the Death, remained manuscript and was only published at the end of the 20th century. To arrange a vocal work for chamber music was not uncommon in those days. Joseph Haydn approved of the arrangement of his Creation for string quintet, published in 1800 by Anton Wranitzky. And in 1799 arrangements of seven of Mozart’s operas were published in arrangements for string quartet or quintet.

Mozart’s Sinfonia Concertante remained manuscript during his lifetime, and there are no reports of a performance. The first publication of the score was in 1802. Only six years later, in 1808, an anonymous arranger published a version for string sextet of KV 364, using the title Grande Sestetto Concertante, per due Violini, due Viole, Violoncello primo concertante e Violoncello secondo.

The choice of a string sextet is extraordinary, as this type of string ensemble had only recently for the very first time been used by Luigi Boccherini, who had published his six sextets op.23 in Paris in 1776. No other significant string sextets were known at the time of this arrangement, and it is not sure that the anonymous arranger had seen or heard the Boccherini pieces.

For the present performances by Rusquartet both arrangements have been revised and occasionally rearranged by the musicians and me, whenever we felt that this would improve the arrangement. Discrepancies between the arrangements and the Neue Mozart Ausgabe scores were as a rule solved by changing the text according to the NMA. For the Sinfonia Concertante the excellent edition of Gunther Schuller (Margun Music) was used.