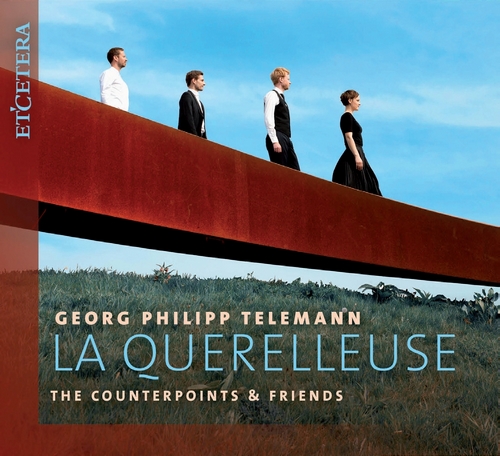 Ouverture-Suite La Querelleuse in B-flat major, TWV 55:G8
Fantasia No. 11 in B-flat major for solo recorder, TWV 40:12
Trio Sonata in G minor, TWV 42:g9
Fantasia No. 3 in C minor for solo cello, TWV 40:4
Trio Sonata in A minor from ‘Six trios’ (Frankfurt, 1718), TWV 42:a1
Cantata ‘Die Zufriedenheit,’ TWV 20:29 in C major (orig. in A major) from ‘VI Moralische Cantaten’ (Hamburg, 1736)
Fantasia No. 12 in a minor for solo violin, TWV 40:25
Trio No. 9 in E major from ‘Essercizii Musici’ (Hamburg, c. 1725), TWV 42:E4
Concerto a 4 in A minor, TWV 43:a3
From the moment we decided to release a debut album, there was no doubt that we would dedicate the entire CD to the music of Georg Philipp Telemann. Perhaps no other baroque composer wrote in such a natural and idiomatic way for each instrument; the pleasures of his music are therefore not enjoyed by listener alone, for it is also a joy to play. But this is not the only reason Telemann has endeared himself to us. His music is filled with the unexpected, which during rehearsals and concerts invites playful and imaginative music making time and time again.

Early music ensemble The Counterpoints truly began in 2011 when recorder player Thomas Triesschijn and harpsichordist Aljosja Mietus began playing together as a duo. The two have performed in European chamber music series and festivals, sharing a special interest in the contrapuntal music of J.S. Bach and the interplay of their musical voices. By 2015, Thomas and Aljosja began to think bigger. They envisioned a group with core members but flexibility in instrumentation, to explore an even wider range of repertoire and colours. They then began to perform with cellist Petr Hamouz, violinist Matthea de Muynck and guest musicians as The Counterpoints. The Counterpoints, all recent graduates of the Royal Conservatoire of The Hague, The Amsterdam Conservatory and University of the Arts Utrecht, have performed together internationally across Europe, and competed as finalists in the York Early Music International Young Artists Competition and the göttingen händel competition. Their most recent engagements have included performances at The Royal Concertgebouw Amsterdam, the International Chamber Music Festival Utrecht, Grachtenfestival Amsterdam and Bachfestival Dordrecht, and appearances on Brava TV, NDR Kultur, NPO Radio 4 and BBC Radio 3.