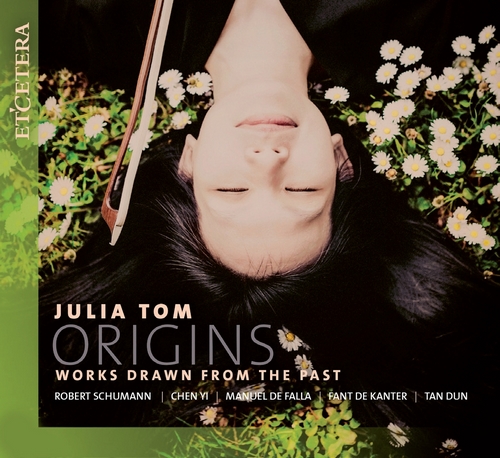 Schumann / Falla / Dun: Origins - Works Drawn from the Past

Tan Dun:
Concerto for String Quartet and Pipa
On this CD, I have chosen works by composers drawing from the folk music traditions of their own cultures of origin. Each of the cultures represented here is also of personal significance to me, whether by virtue of ancestral background, a passport acquired, a feeling of kinship, or more than a decade of life lived. It is thus music that also reflects my own origins, after a lifetime lived between an ever-growing collection of cultures.

There was a moment when my particular interest in folk music got switched on. I traveled through Andalusia in 2001 and befriended a group of musicians playing Arabo-Andalusian music. It was my first encounter with not only hearing folk music live, but also with experiencing the place of folk music in its original community. When I first saw these musicians, they were playing a concert in a setting very recognizable to me: on a stage, receiving applause before an audience. It was after the concert, after meeting the musicians and being invited out for drinks, that I encountered something I had never experienced before: over a bar counter, a guitar came out, rhythmic clapping began, and people around the room started taking turns bursting into song. Everybody sang, from the cook to the grandmother to the former audience member from balcony seat 3B, the whole room shouting encouragement: “Olé, Maria!” “Olé, Juanito”…

After a few nights of experiencing this phenomenon, I had settled nicely into my chair at the bar for another night of listening when I heard my name called – “Julia, olé!” and I saw faces turn to me in expectation. My heart stopped; my veins constricted; but before I could think, “No way!” my mouth had opened and sound was coming out, belting out a line in a crowded room full op people clapping their hands in a steady rhythm.

It felt like stepping through a musical looking-glass: notes could just be conjured out of thin air, with no preparation necessary; audience member and musician could switch roles from moment to moment; the only logic was the simple, sheer pleasure of making sounds and rhythms together, in the moment.

In researching this CD, I got to meet and speak with people from folk cultures around the world. I asked everyone on what occasions people in their communities made music. And I heard from everyone the same answer: whenever people gathered together, they made music. I believe now that making music lies deep in our human roots. That the sheer joy it gives people to make music has helped us thrive through the ages. That making music “in folk style” – without judgment, out of the spirit of the moment – is part of all of our origins.