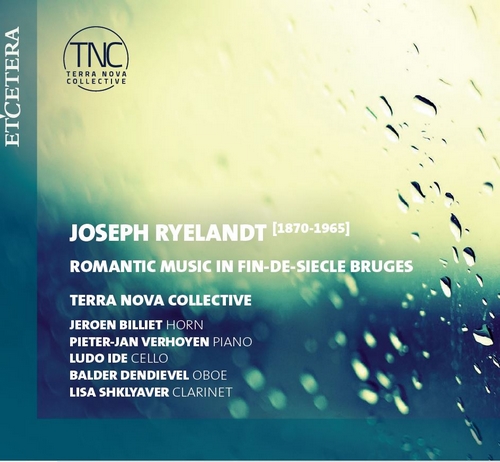 Etcetera - KTC 1655
Kompozytor
Joseph Ryelandt (1870-1965)
Wykonawcy
Terra Nova Collective:
Jeroen Billiet, horn
Pieter-Jan Verhoyen, piano
Ludo Ide, cello
Balder Dendievel, oboe
Lisa Shklyaver, clarinet
Oboe Sonatina, Op. 28
Fantaisie for Clarinet, Op. 40
Horn Sonata, Op. 18
Cello Sonata No. 1, Op. 22
Three Pieces for Clarinet, Op. 17
A composer. How else could we describe the professional activities of a man such as Joseph Ryelandt (1870-1965) during the first thirty years of his adult life? On a professional level, Ryelandt did nothing except compose music from the last decade of the 19th century until his appointment as director of the Bruges conservatory in 1924. This was not because he had nothing to occupy his time; he corresponded extensively, raised eight children, cared for his wife who was often ill, and did his best for the benefit of his city in many and various ways. Professionally, however, he was concerned only with music. He wrote about music, organised and conducted concerts, was a member of the board of trustees of the conservatory and gave lectures, all without a salaried position or tenure. During these years, however, he composed an impressive body of work. He had already composed some eighty works before his conservatory appointment in 1924, almost two thirds of what would form his complete works. It is clear from the above that composition was his principal concern; we can only conclude, in terms of his professional life, that he was first and foremost a composer.

How was Ryelandt able to devote his life to art without any paid employment? The answer is simple: he was rich. His family’s fortune had been made by his grandfather who had owned a hospital in Bruges and had amassed a fairsized fortune, which he invested in property and then lived off the proceeds. Ryelandt’s father also had no concerns about money and died at a relatively young age, with the result that Joseph Ryelandt inherited sufficient means to live on. After his marriage in 1899, he devoted himself entirely to his family and to composition. Shortly before WW1 he built a large neo-Gothic house that had been designed by the renowned architect Huib Hoste and continued to lead a life that was relatively free from care. The First World War and the financial crisis and inflation that followed it nonetheless compelled Ryelandt to take up salaried employment at the age of fifty-four: he became director of the Bruges conservatory.