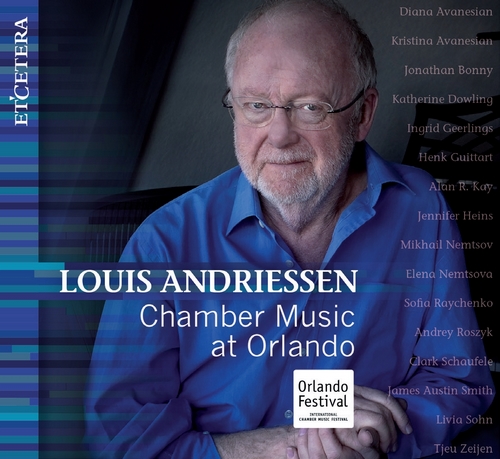 Elegy
Rincorsa e salti (Run, and jump)
Double
Disco
Silver
To Pauline O
Garden of Eros
The Hague Hacking Scrap
Mach’s mit mir, Gott (Do unto me, God)
Louis Andriessen (b. 1939) was the Central Composer of the Orlando Festival 2018. Earlier editions of the Orlando Festival (the first and oldest chamber music festival of The Netherlands, established 1982) also contained performances of his beautiful and fascinating music, such as …miserere…, To Pauline O. and Remembering that Sarabande.

In 2018, however, no fewer than 25 of his chamber music compositions were performed. The pieces were played on 14 of the 20 Orlando concerts. A total of 24 dedicated musicians performed Andriessen’s music, including two ensembles participating in Orlando’s Master Class program, the AuRoRa and Avanesian Duos, which are also heard on this CD. In total, some 3.5 hours of music, of which this CD presents 70 minutes, with nine compositions that were either not yet recorded (six of the pieces) or no longer available on CD. The exception is the live recording of Silver, which was added at special request of Andriessen.

The 25 works presented at the Orlando Festival were composed over a period of 61 years, dating from 1957 until 2018. Quite a few of these pieces had not been performed in recent years (or even decades) in The Netherlands. The wonderful variety in instrumentation of these Andriessen compositions suited the Orlando Festival concept very well, as they range from solo (violin, oboe, piano, harpsichord, organ), duo (violin/ piano, violoncello/piano, clarinet/piano, oboe/violin, two pianos, two percussionists), trio (flute/oboe/clarinet), quartet (string quartet, four violas, piano/ harpsichord/Glockenspiel/celesta, soprano/flute/violin/marimba, percussion/ piano/celesta/synthesizer) and sextet (voice/violin/harp/percussion/piano/ double bass) to the special septet of Silver (flute/clarinet/violin/violoncello/ marimba/vibraphone & Glockenspiel/piano).

These mostly unique ensembles could be formed because of the large and versatile group of regular Orlando musicians. Our tribute to Andriessen included music by Francis Poulenc, Igor Stravinsky, Eric Satie, César Franck and Marcel Dupré, as well as by his teacher Kees van Baaren and his former student Martijn Padding.

Louis was present during four very full days, rehearsing and working with the musicians and attending the performances. Those precious August days contributed to a true ‘Andriessen Fest’ for everyone involved, musicians and audiences alike.