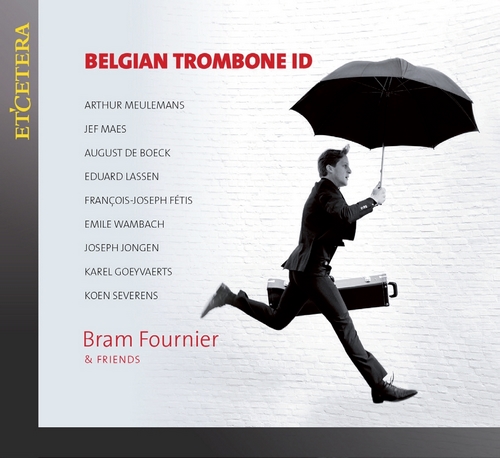 Koen Severens:
Aber
This recording is the result of a research project into Belgian music for trombone carried out at the Royal Conservatory of Antwerp (AP Hogeschool). Bram Fournier chose a varied selection of works from the wealth of repertoire available; the works cover a period of almost one hundred and fifty years of Belgian trombone music, from François-Joseph Fétis, the pioneer of Belgian musical life, to the contemporary composer Koen Severens.

All of these works, with the exception of Joseph Jongen’s Aria et polonaise, are recorded on CD here for the first time. Emile Wambach’s Concert aria has, however, been recorded by Glenn Van Looy on euphonium; Eduard Lassens’ Fantasiestücke have been recorded with piano accompaniment by John Rojak, whilst Blair Bollinger has recorded them in a version with full orchestra.

Bram Fournier is solo trombonist with the Théâtre Royal de la Monnaie in Brussels and is also a member of the wind ensemble I Solisti in Antwerp. He is also a frequent guest player with the Hermes ensemble, Belgian Brass, Antwerp Symphony Orchestra, Brussels Philharmonic, National Orchestra of Belgium and the Casco Phil. Fournier studied at the Lemmens Institute in Leuven and with Jan Smets at the Royal Conservatory of Antwerp, where he gained his master’s diploma with distinction. He completed his studies with Jonas Bylund at the Hochschule für Musik in Hanover and participated in master classes with Alain Trudel, Christian Lindberg, Ian Bousfield, Jörgen Van Rijen and Michel Becquet. Whilst still a student he was a finalist in the Lions European Musical Competition and played in the Schleswig-Holstein Festival Orchestra Academy and the Dutch Orchestra and Ensemble Academy. He was a member of the Flanders Symphony Orchestra from 2010 to 2013; he was trial principal trombone for the Philharmonia Orchestra under Essa-Pekka Salonen in London in 2012 and played as solo trombone.