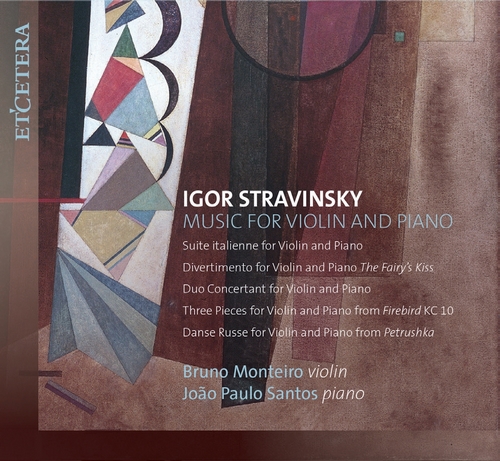 Suite italienne for Violin and Piano
Divertimento for Violin and Piano, 'The Fairy’s Kiss'
Duo Concertant for Violin and Piano
Three Pieces for Violin and Piano from 'Firebird' KC 10
Petrushka - Danse Russe for Violin and Piano
Heralded by the daily Público as “one of Portugal´s premier violinists” and by the weekly Expresso as “one of today´s most renowned Portuguese musicians”, Bruno Monteiro is internationally recognized as a distinguished violinist of his generation. Fanfare Magazine describes him as having a “burnished golden tone” and Strad states that his “generous vibrato produces radiant colors”. MusicWeb International cites interpretations that have a “vitality and an imagination that are looking unequivocally to the future” and that reach an “almost ideal balance between the expressive and the intellectual”. Finally, Gramophone Magazine praises his “unfailing assurance and eloquence”.

Monteiro gave his debut recitals at the age of 13 at the S. Luis and Rivoli Theaters, and his first solo orchestral concert at the Lisbon Opera House (Teatro Nacional de Sao Carlos) when he was 14. Since then, he has given concerts as a recitalist, soloist and chamber musician in all the major musical centers of Portugal, with repertoire spanning composers from Bach to Corigliano, including important Portuguese composers. Internationally, he has appeared in Spain, France, Italy, the Netherlands, Germany, UK, Austria, Romania, Bulgaria, Ukraine, Israel, Denmark, the Philippines, Malaysia, South Korea and the USA. Monteiro has performed in prestigious venues such as the Palácio Cibeles and Casa de America in Madrid, Vienna´s Musikverein, Bucharest´s Cultural Center, Sofia´s Bulgaria Hall, Kiev´s Philharmonic Hall, the Felicja Blumenthal International Music Festival in Tel Aviv, Washington´s Kennedy Center and New York´s Carnegie Hall, among others. In recital, he has performed with Joao Paulo Santos since 2002.