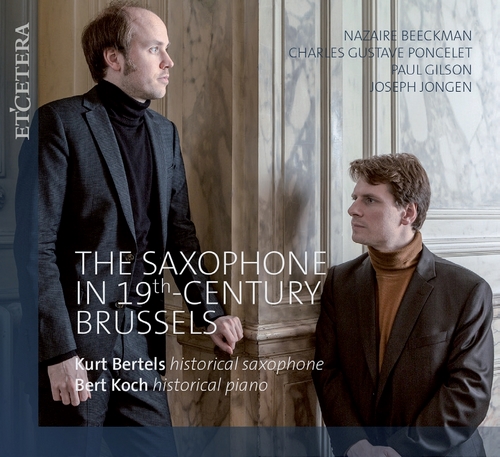 This release is the artistic result of the doctoral research carried out by saxophonist Kurt Bertels at the Koninklijk Conservatorium Brussel and the Vrije Universiteit Brussel from 2014-2020. His research focused on the context, repertoire and performance practice of saxophonists who studied at the Brussels Conservatory between 1867 and 1904. The individual topics for research were highly varied: what were the national and international contexts at the time that saxophone teaching began in Brussels? Who were the teachers and who were their pupils? What repertoire did these saxophonists play? What is the exact information contained in source material from the time, including contemporary saxophone methods, recordings, instruments and scores, that could be relevant to the establishment of a historically informed performance practice?

The founding of the saxophone department at the Brussels Conservatory in the 19th century was due to an initiative of François-Joseph Fétis (1784-1871), the first director of the Brussels Conservatory and a renowned musicologist, who wanted to make Brussels the central point of Belgian musical training. Fétis took the Conservatoire de Paris as his template in order to give his own Brussels establishment an international reputation. He was also known to be an advocate of the new instruments that were being developed by Antoine-Joseph (Adolphe) Sax (1814-1894); Fétis, together with Jean-Valentin Bender (1801-1873), the head of music of the Royal Symphonic Band of the Belgian Guides, quietly introduced Sax’s new instruments into the military bands of the time.

We hope, through this recording, to expand the traditional saxophone repertoire. We therefore present less familiar music for saxophone by composers who were active in the Brussels Conservatory during the above period. Beeckman published a number of works and also used them as teaching material for his own students. Poncelet seems to have composed only one work for saxophone; we rediscovered his Hérodiade during our researches and it is here recorded for the first time. Paul Gilson (1865-1942) composed not only the world’s first saxophone concerto but also a chamber music work, Improvisation; this is a transcription that Gilson himself made of an earlier work for violin and piano and it too is recorded here for the first time. Joseph Jongen (1873-1953) composed a Méditation for cor anglais and piano in 1901; the transcription for alto saxophone and piano recorded here is Jongen’s own.