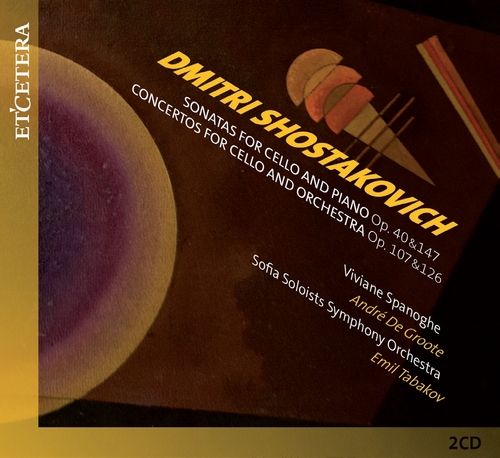 CD 2:
Concerto No. 1 for Celllo and Orchestra, Op. 107
Concerto No. 2 for Cello and Orchestra, Op. 126
Dmitri Shostakovich is the only Soviet composer of his generation to achieve international recognition. The dictatorial regime was pleased to present him as the ideal Soviet citizen who composed according to the rules of social realism as laid out by the authorities. Composers were to write music for and through the Russian people – atonality, harsh dissonances and expressive sounds were frowned upon, as was personal expression, labelled “decadent” or “bourgeois”. Shostakovich was thus a victim of a regime that used terror as an instrument of psychological abuse, first punishing and isolating, then healing and reintegrating. Many of his compositions were publicly criticized and insulted; he was forced to apologize and subsequently “adapt” his style in order to receive his rehabilitation. Many of Shostakovich’s friends were less successful, emigrating westwards, suffering deportation, even death. How Shostakovich managed to live under such pressure and how this influenced his music is no easy evaluation. It appeared simple when the so-called Memoirs of Shostakovich appeared in 1979, published by Solomon Volkov under the title “Testimony”. Volkov, an “émigré” Soviet music journalist, suggested that Shostakovich’s music comprised a series of codes intelligible to a few intimate friends, mocking the power-hungry Soviet system. Volkov produced various interpretations of Shostakovich’s abstract musical figures with the help of the composer (according to Volkov), such as marching rhythms with a military feel as a mockery of the system, or a lonely cantilena without accompaniment as the composer’s fundamental loneliness in the Soviet system. Shostakovich’s music is however so much greater than the anti-soviet message it contains, and shows musical qualities of the highest order and authentic human emotion.