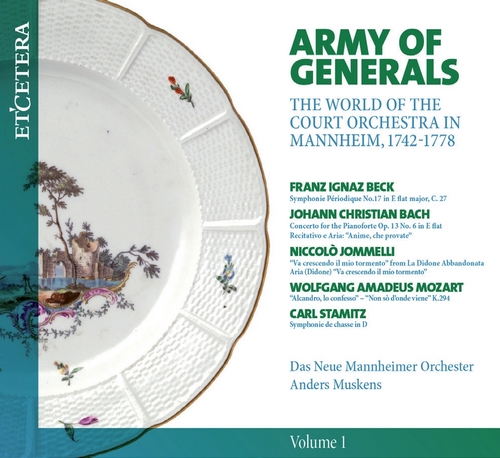 Carl Stamitz:
Symphonie de chasse in D
Under the reign and patronage of Elector Carl Theodor during 1742-78, the court orchestra of Mannheim became the leading centre of musical life in Europe. Not only were its performances of the music of the finest composers of the day considered first rate, but also were its own school of composers, virtuoso players, and innovative style. This school had a profound influence on later composers like Mozart and Haydn, and Mozart notably sought employment there, albeit unsuccessfully.

German philosopher and music critic Christian Friedrich Daniel Schubart wrote in 1784: “The elector’s theater and his concert hall were almost an odeum, characterized by the masterworks of all artists. The elector ‘s changing mood contributed very much to this taste. Jommelli, Hasse, Graun, Traetta, Georg Benda, Sales, Agricola, the London Bach (Johann Christian Bach), Gluck, [and] Schweitzer alternated there year after year with the compositions of his own masters, so that there was no place in the world where one could so surely develop his musical taste so quickly as in Mannheim […] No orchestra in the world has ever surpassed the performance of the Mannheim orchestra. Its forte is thunder; its crescendo, a cataract; its diminuendo, like a crystal stream plashing in the distance; its piano, a spring breeze. The wind instruments were all as suitable as they could be: they lift and carry, or they fill up and animate the storm of the violins.”

Das Neue Mannheimer Orchester (DNMO) was established in late 2016 in The Hague by Canadian harpsichordist and fortepianist Anders Muskens with the aim of recapturing the spirit of music from the period of the original Mannheim Court Orchestra, including late Baroque, galant, Classical, and early Romantic – especially from composers of the Mannheim School. As an early music ensemble, DNMO plays on period instruments using historically informed techniques. It is made up of young professional early music specialists, and is a highly international group of young specialists, playing concerts internationally and featuring talents from all around the world. DNMO is committed to challenge established boundaries and conventions of the Classical Music world with the goal of rekindling the passion of 18th century performances. DNMO has a number of research initiatives to better understand and reconstruct 18th century orchestral performance practices. In addition to presenting music from well-known masters, the DNMO seeks to present music of lesser known composers which is equally worthy of performance.

Anders Muskens is a Canadian early keyboard specialist and director of DNMO.