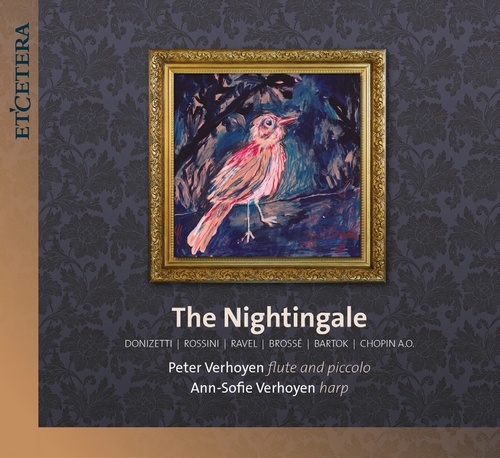 Dirk Brosse:
The Chinese Wall
Flying … as a Bird

Frederic Chopin:
Variations on a Theme by Rossini

Erin (arr. Colin Fleming)
Lochaber no More (Cha till mor mo bhean) (arr. Sunita Staneslow)
As piccolo solo of the Antwerp Symphony Orchestra, Peter Verhoyen has built up an excellent reputation as a specialist on his instrument. Together with pianist Stefan De Schepper, he has developed various concert programs and CD recordings for piccolo and piano. With these projects he demonstrates that the piccolo earns a spot on the concert stage as a recital instrument. For a contemporary touch, Peter asked several Flemish composers to write new works for his instrument. For his dedication to contemporary Flemish music, Peter has been awarded the Fuga Trofee from the Union of Belgian composers. As a piccolo specialist Peter is regularly invited to give masterclasses and piccolo recitals in conservatories and flute and piccolo festivals in Europe, Columbia, Brazil, Mexico, Australia and the USA.

Ann-Sofie Verhoyen started ballet lessons when she was three, piano lessons at the age of four. She soon traded the piano for her favorite musical instrument, the harp. She took harp lessons at the conservatoire of Bruges (class of Eline Groslot) and at the conservatoire of Roubaix (class of Anne Le Roy). In Roubaix, Ann-Sofie obtained her final diploma for harp with mention tres bien a l’unanimité (2015). In September of the same year, she was admitted to the young talent course CEPI (Cycle d’Enseignement Professionnel Initial). For several years Ann-Sofie played in the Re Mix Orchestra, an initiative of the Antwerp Symphony Orchestra. She took master classes with Bernard Andres, Ulla Van Daelen and Hanna Grociak. She was the winner of the Vlamo music competition for soloists (Leuven 2009) and the harp competition Harpegio (Brussels 2010). Ann-Sofie has a special interest in chamber music. She plays concerts with her father and with flutist Sofie Maes and cellist Marie Ponseele. Since 2013 she has been collaborating as harp accompanist at the International Flute Seminar Bruges. In June 2017 Ann-Sofie completed her studies in the Greek-Latin department of the Sint-Lodewijkscollege in Bruges, after which she started the linguistics and literature studies at KULAK Kortrijk. In September 2019, she successfully started the studies graphic design and illustration at KASK in Ghent.