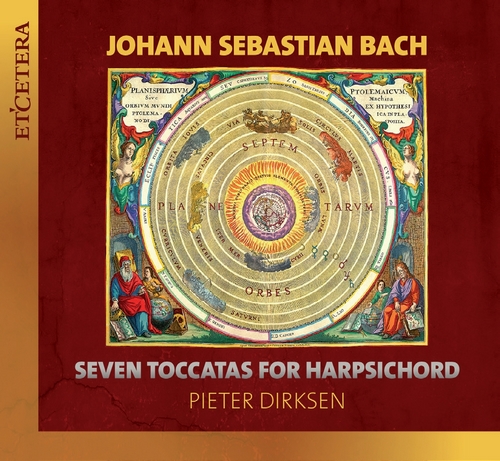 Toccata in F# minor, BWV 910 (Moon)
Toccata in E minor, BWV 914 (Mercury)
Toccata in G, BWV 916 (Venus)
Toccata in D minor, BWV 913 (Sun)
Toccata in D, BWV 912 (Mars)
Toccata in C minor, BWV 911 (Jupiter)
Toccata in G minor, BWV 915 (Saturn)
The words “Bach” and “toccata” seem to be inextricably linked with each other. However, a number of questions can be raised about this paradigm. This commonly made association mainly applies to the four organ toccatas, and of course especially to the all too celebrated one in D minor (BWV 565) which has become an archetype of both organ music in general and of Bach’s music in particular. Apart from the fact that BWV 565 may not even have been composed by Bach himself, it remains remarkable that three or four organ toccatas stand opposite seven toccatas for harpsichord, which are equally interesting and virtuosic, suggesting that the harpsichord was as important to the young virtuoso as the organ. In his enthusiasm for the multisectional toccata, Bach stood alone in his day. The toccata principle, one of the mainstays in seventeenth century keyboard music, went quickly out of fashion after 1700.

It consists of an alternation of strongly contrasting sections, some rhapsodic and free, others fugal and strict. There are virtually no toccatas to be found anymore among Bach’s contemporaries. For them it was the sonata which took over the function of a free keyboard work not tied to dance forms. The reason why Bach cultivated the toccata even against the spirit of the times, was that he had become fascinated in his youth by the North German keyboard style, in which the seventeenth-century toccata had reached its peak. But even Bach was not immune to the changing aesthetics, and as early as c.1710, when he was only around 25 years old, he too completely abandoned the toccata.

It is certainly no coincidence that around the same time the old cantata form with several smaller, interdependant movements was replaced in Bach’s music by a more modern, rational form with an alternation of recitative and aria. Similarly, the toccata was replaced by the “rational” pairing of prelude and fugue.