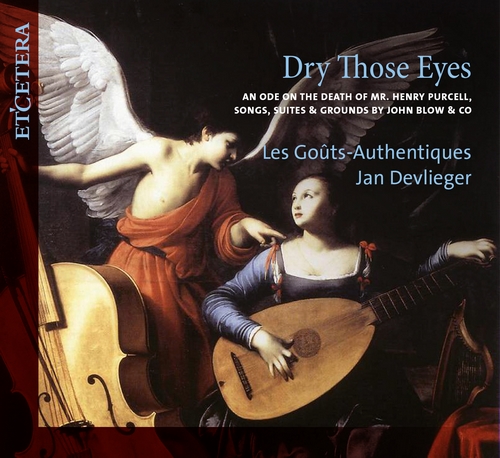 William Croft:
Chacone in A minor

Gottfried Finger:
A Ground in A minor

John Blow:
Dr. Blow’s Chacone in Faut
An Ode on the Death of Mr. Henry Purcell

Henry Purcell:
Dry those eyes
Return fond muse
With him he brings the partner of his throne
Charon the peaceful shade invites
Ground in G minor
Sing, sing, ye druids

Jeremiah Clarke:
Suite in G minor
Les Gouts-Authentiques is an early music ensemble whose goal is to introduce ‘authentic tastes’ – music styles from the Renaissance, Baroque and Classical period – to their audiences in a colourful and lively manner. Les Gouts-Authentiques is a reference to Les Gouts-Réunis, in which work François Couperin described the striving for a fusion of the French and Italian baroque styles during the first half of the 18th century. Couperin was convinced that this symbiosis would result in better music or even a better world. The forces of Les Gouts-Authentiques varies according to the program, and often the voice, recorder or harpsichord are put in the spotlight. The ensemble is always formed by artistic director Jan Devlieger. It is not uncommon for young and promising musicians to be engaged in this process, creating a cocktail of experience and youthful enthusiasm. In the past, Les Gouts-Authentiques explored music by father Bach, sons of Johann Sebastian Bach, English and French baroque music, Bruegel program with music from the 16th century, but also programs including historical dance such as Le Roi tout cour(t). From 2008 on, the following CDs were realized: A due cembali obligati for two harpsichords, The Submission based on music by the Loeillet family, The Delightful Companion, made up for recorder duets from renaissance and baroque periods and recently In Vain the Am’rous Flute with vocal and instrumental pieces by Purcell and contemporaries.

Jan Devlieger was born in Ghent and studied at the conservatory there, gaining diplomas in chamber music, harmony, counterpoint and fugue, as well as master degrees in recorder and harpsichord. He is an active recorder player, harpsichordist, continuo player, concert presenter, publicist and composer. He has made CD recordings as solo harpsichordist and also with his own ensemble Les Gouts-Authentiques.