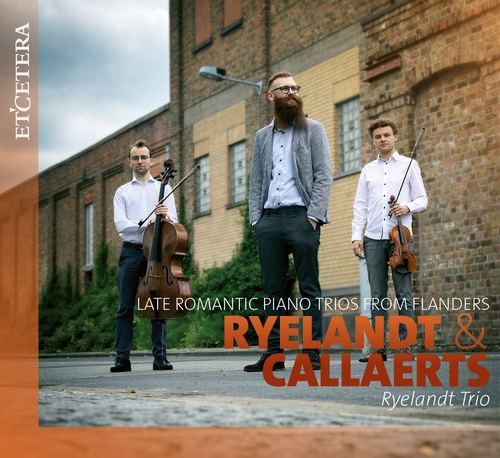 Joseph Ryelandt:
Piano Trio No. 1, Op. 57
Piano Trio No. 2, Op. 131
Canon en Trio, Op. 70
The Trio Telepatico, the predecessor of the Trio Ryelandt, was founded in 2009 as a part of Arco Baleno’s young talent programme; its members, three talented and driven young musicians, were violinist Jeroen De Beer, cellist Martijn Dendievel and pianist Pieter-Jan Verhoyen. They studied chamber music at the Stedelijk Conservatorium in Bruges and graduated in 2013, after which they were coached by musicians of the Arco Baleno ensemble, by Bart van de Roer (Storioni Trio) and by Marcel Lequeux. The Trio Telepatico performed in Flanders, the Netherlands and in Germany; they released their first CD in 2014, featuring works by Frank Bridge, Edison Denisov and Paul Juon, as well as the Flemish composers Erik Desimpelaere, Piet Swerts and Marc Matthys. The ensemble participated in the project Bericht aan de Bevolking as part of a commemoration of the First World War in the autumn of 2017, collaborating with Kotjesvolk to perform poignant music that has since been released as a double CD.

The cellist Pieter-Jan De Smet joined the ensemble in 2019. The Ryelandt Trio is the successor to the Trio Telepatico; its combination of unique, interesting and lesser-known works is always carefully balanced to provide a fascinating programme for the audience. The Trio is also a fervent advocate of Belgian music and frequently performs lesser-known works from this repertoire. Robert Groslot composed La Fenice for them, after which they collaborated with the musicologist David Vergauwen, the founder of the Ryelandt Festival; their most recent CD is devoted to piano trios by Joseph Ryelandt and Joseph Callaerts. The trio has chosen to record these exceptional and unjustly ignored works instruments of the period.