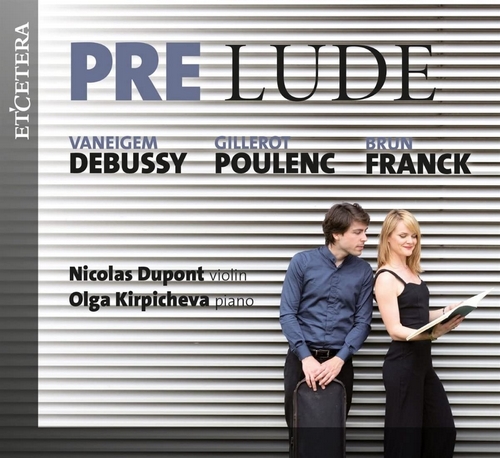 Cesar Franck:
Sonata for violin and piano in A major
In 1915, all three composers who make up this recording came together in quite a particular fashion. At that point, César Franck (1822-1890) already passed away, while Claude Debussy (1862-1918) was unfortunately about to follow him in just a few years’ time. Nevertheless, the then sixteen year old Francis Poulenc (1899-1963), very much ‘alive and writing’, audaciously addressed a letter to a wide range of French-based composers like Dukas, Roussel, Satie, Saint-Saëns and… – not to be forgotten, of course – Debussy. This noteworthy survey very specifically inquired into Franck’s role in musical history: “pour savoir ce qu’ils pensent de Franck”, as Poulenc stated in his letter to Igor Stravinsky.

Debussy’s answer, dated Saturday 23 October 1915, was conspicuously short but on first reading respectful towards Franck’s merits for the long-standing classical music tradition: “En ce moment, nous devons tâcher a ressaisir nos vieilles traditions; celles-la dont nous avons laissé la beauté qu’elles n’ont cessé de contenir. Mais le respect que l’on doit a César Franck commande d’affirmer qu’il est un des plus grands musiciens flamands.” By describing Franck, a native Liégeois who in time got officially adopted in French circles, as a mere Flemish musician instead of one of their own great composers, one might detect a certain disdain in this obligatory praise of his colleague. Be that as it may, every work on this CD not only testifies to the idiomatic compositional possibilities of Debussy, Poulenc and, most certainly, also Franck, but in addition opens up an exciting path to some new music. It’s were the title of this album comes in, as well as the call to action that preceded it!