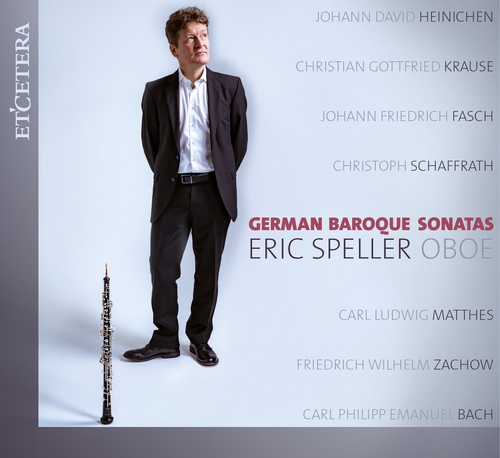 Friedrich Wilhelm Zachow:
Trio Sonata in F major for oboe, bassoon and basso continuo Carl Philipp Emanuel Bach:
Sonata in G minor for oboe and basso continuo
After CDs devoted to Robert Schumann, Benjamin Britten and Antal Dorati, I then became interested in 19th century chamber music and presented works by Clara Schumann, Gustav Schreck, Adolphe Deslandres and Thomas Walmisley. Given that the 19th century oboe repertoire is relatively limited, I have always sought out little-known works by forgotten composers of that time which I then transcribed and adapted for the oboe.

This new recording is devoted to German baroque music of the 18th century: it gave me the chance not only to discover wonderful pieces by almost unknown composers but also to include major works of the oboe repertoire, including sonatas by Carl Philipp Emanuel Bach, Johann David Heinichen and Johann Friedrich Fasch.

I had always been attracted by baroque music I still remember how I felt when I first heard recordings of Bach’s cantatas by Nikolaus Harnoncourt and Gustav Leonhardt and I began my training in baroque oboe when I was a student at the Conservatoire Supérieur of Lyon; since then I have shared my life with the baroque recorder player and oboist Héloise Gaillard.

Given my knowledge of baroque interpretation, this project’s particular challenge was to find a way to play in period style on modern instruments. This was a great challenge for myself and for the virtuoso musicians who surrounded me for this recording; knowing the requirements of the style, we all took part in meticulous work on ornamentation, articulation and messa di voce as well as in a more general study of musical rhetoric to develop coherence and expression.

For variety of timbre, I decided not only to include works for violin but also to alternate bassoon and cello for the continuo, depending on the work concerned. Our recording was made in the Amuz church in the historical heart of Antwerp; it was an intense moment of pleasure and exchange for the entire ensemble that I hope will be felt by our listeners as well.