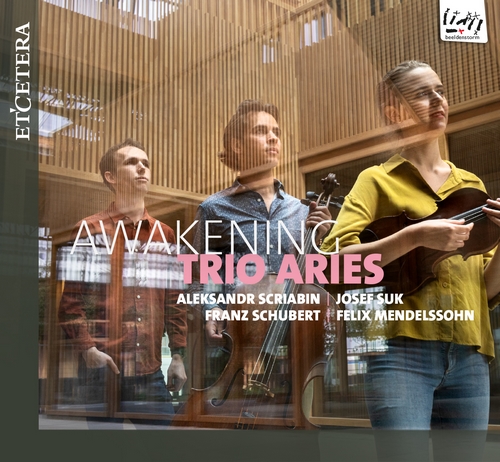 Felix Mendelssohn:
Piano Trio in D minor, Op. 49
Three young Belgian musicians violinist Alice Van Leuven, cellist Paul Heyman and pianist Wouter Valvekens formed the Aries Trio out of their mutual passion for chamber music and for the piano trio in particular. Each of them received a broad education, both as soloist and chamber musician, in a world-renowned establishment: Alice at the Universität der Künste in Berlin, Paul at the Zürcher Hochschule der Künste in Zurich and Wouter at the Royal Academy of Music in London.

Aries is the Latin name for the constellation of the ram. The trio performs a broad repertoire ranging from classical to contemporary works and is committed to revealing its young and fresh vision of music to its audiences. The music itself is given extra power thanks to the trio’s search for various elements, one of which is the groove, the synthesis between timbre and timing that is an integral part of every piece of music.

The trio has been active since 2018 and has given recitals at the Klara festival in Bozar and the spring concert at the Royal Palace in Brussels, the concert series Espace Garage in Ottignies, the festival Klassiek Leeft Jong in Knokke, the Midi- Minimes festival, the Zomer van Sint-Pieter in Leuven, OdeGand in Ghent, and for Klara in deSingel in Antwerp. The Aries Trio made its debut in the Henri Le Boeuf concert hall of BOZAR in Brussels in June 2020.