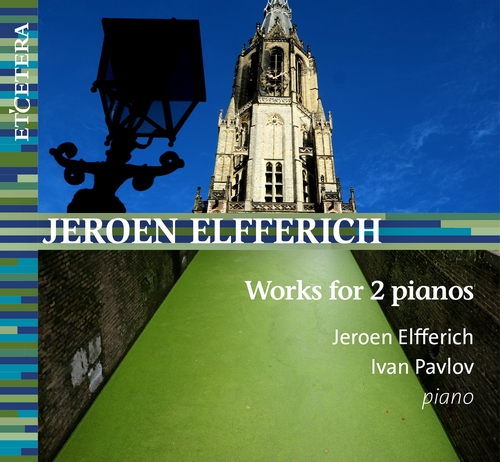 Etcetera - KTC 1754
Kompozytor
Jeroen Elfferich (ur. 1965)
Wykonawcy
Jeroen Elfferich, piano
Ivan Pavlov, piano
Clara
Bike
Tanz
Snowflakes
Delfia musica
Sweet Phrases
Origin unknown
Fragmented Happiness
81 Emotional Combinations
The Homecoming
Jeroen Elfferich (1965) is a musician/composer from the Dutch town of Delft. He began as a percussionist and graduated from the Rotterdam Conservatory in 1992, after which he formed the Elfferich Four, a jazz-rock band with whom he performed regularly and also recorded several CDs. He wrote all the music for his band and also began to develop his own rhythms, often making use of irregular time signatures.

Elfferich realised around 2010 that his polyrhythms would sound particularly effective when played on two pianos and has not ceased to compose works for two pianos since that time; he has also released CDs of his own works and has built up an extensive repertoire.

He formed a duo with the Hague-based Bulgarian pianist Ivan Pavlov in 2021, with whom he performs his own works exclusively. This is their first CD recording.

Elfferich’s music is characterised by its use of very few notes, many repetitions and interwoven rhythms. He seeks to rediscover the simplicity and essence of music by removing every unnecessary element; in connection with this he frequently uses series of numbers that include shifts, omissions, and additions. Elfferich wrote a great quantity of pop songs some forty years ago and followed this with music in the jazz idiom. Recently he has composed only music for 2 pianos. He has developed a style over the years in which influences from other musical idioms are evident, although his style as a whole always remains recognisable and idiosyncratic.

Jeroen Elfferich was born and raised in Delft and can trace his ancestry back to the time of William of Orange. The town of Delft is very much present in this recording, as the carillon of the Nieuwe Kerk plays on its last track. Delfia Musica is an ode to Delft; Clara is based on Clara van Sparwoude, a well-known patron of charities in Delft during the late 16th and early 17th centuries; she died childless and established a fund from which every descendant of her parents would receive a gift on their marriage. Elfferich himself is a descendent of Clara van Sparwoude’s sister.