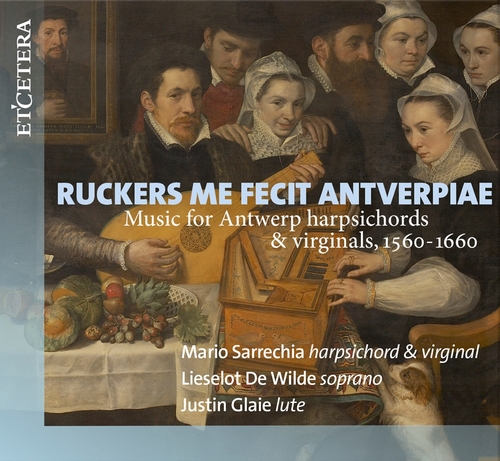 Brande champanje (Susanne van Soldt)
De frans galliard (Susanne van Soldt)
Almande de La nonette (Susanne van Soldt)
Daphne (Camphuysen)
Wt de diepte o Heere (Psalm 130) (Susanne van Soldt)
Galliarde quy passe (Susanne van Soldt)
Pavane dan Vers (Susanne van Soldt)
Antwerp, around the middle of the 17th century. Music issues from an imposing house on the Meir. Inside the house, paintings by Rubens, Van Dyck, Brueghel, Vermeer and Tintoretto hang everywhere. A small but international group seated close to the fireplace is listening to a concert arranged especially for them. Francisca Duarte (1619-1678), who lives in the house, plays one of the many Ruckers-Couchet harpsichords and virginals owned by the Duarte family. She has chosen the music carefully: there are works from old collections of manuscripts compiled for and by the Duarte family, including music by John Bull and arrangements of dances and songs, as well as new repertoire by harpsichord virtuosos such as Jacques Champion de Chambonnieres and Johann Jakob Froberger who have shared their recent compositions with the family. One of the guests, Béatrix de Cusance, noted in a letter ‘Dear Francisca lets us hear unusual and extraordinary things. She plays a thousand times better from day to day’. Francisca’s father Gaspar, and her sister Leonora frequently perform with her; he is a lutenist and she is a singer. Heavenly music continues to resound in Antwerp until well after midnight.

The music on this CD is structured like a concert that Francisca Duarte might have given. Although Francisca’s talent was exceptional, she was just one of many Antwerp citizens who could play the harpsichord well; competence on the harpsichord was an important part of the education of the daughters of the wealthy middle-class in the 16th and 17th centuries. Music created harmony in life, and its playing encouraged elegance.
Music for Antwerp harpsichords & virginals, 1560-1600. Instruments: Virginal (muselar, 6 foot), by Walter Maene (1976) after Joannes Couchet (Antwerp, 1650); Harpsichord (1 keyboard), by Jean-Pierre Hemmeryckx (2018), after Andreas Ruckers (Antwerp, 1644)