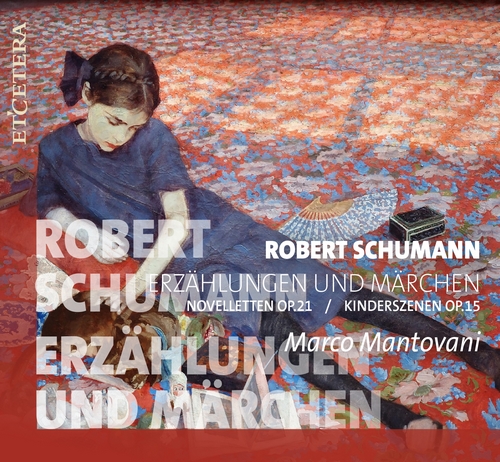 Etcetera - KTC 1756
Kompozytor
Robert Schumann (1810-1856)
Wykonawcy
Marco Mantovani, piano
Novelletten, Op. 21
Kinderszenen, Op. 15
A new recording of piano pieces by Robert Schumann; why does Schumann, after nearly two Centuries (Novelletten and Kinderszenen were composed in 1838), still speak to us? To my mind, Schumann is a composer with whom it is natural to empathize. He possesses the rare ability to penetrate into the depths of the human spirit and to perceive its every psychological facet. Through his music, Schumann bares his soul with unequalled honesty and establishes an intimate dialogue with his listener. With this first album, I wanted to pay homage to a composer that I love almost unreasonably.

The reasons for accompanying what is probably Schumann’s most popular work, Kinderszenen (Scenes from Childhood), with the magnificent and rarely performed cycle of Novelletten are several. The two works were composed in the same months of 1838 and the pieces that came together to form Kinderszenen were originally conceived as part of the same project as Novelletten. Schumann wrote in his diary that he composed a polonaise for the Novelletten (n.5) and Glückes genug during the same couple of days. The intimate middle section of the same Novellette n.5 (bars 88-111) was at first intended as a piece for the Kinderszenen. Moreover, in a letter to the publisher Breitkopf&Härtel (21 March 1838) Schumann confesses that his Kinderszenen were originally intended to serve as an appendix (Anhang) to the Novelletten. This might seem odd at first. On the surface these works have many more differences than analogies. They seem light years apart. However, they might have a common poetic inspiration.