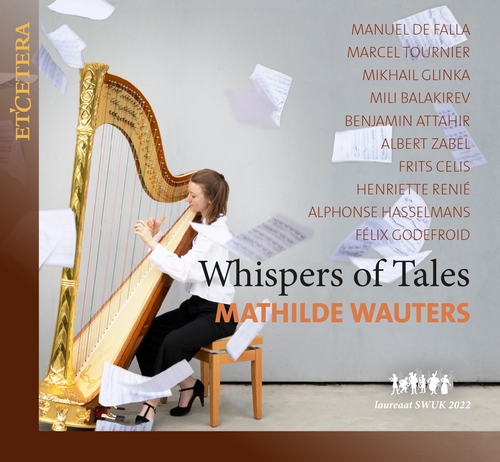 Felix Godefroid:
La danse des Sylphes
Mathilde Wauters (29/12/1995) was born in Bruges into a family of musicians. She took her first steps in the harp world at the age of five with her sister Emma. After this introduction to the harp, she took lessons with Eline Groslot at the Stedelijk Conservatorium in Bruges. At the age of 15, she was accepted at the Royal Conservatoire of Antwerp in the class of Sophie Hallynck as a young talent. She obtained her Master’s degree there with highest distinction in 2017. Mathilde then perfected her skills at the Conservatoire National Supérieur de Musique de Paris in Isabelle Moretti’s class, where she obtained her Master’s Degree with congratulations from the jury. Mathilde completes her training at the Orchestra Academy of the Munich Philharmonic, where she performs under the direction of Valery Gergiev and is accompanied by solo harpist Teresa Zimmermann. Mathilde was laureate of several national and international competitions, including the international competition Félix Godefroid and the national competitions Harpegio and Belfius Classics. She was also awarded a medal by the Union of Belgian Composers. In November 2013, Mathilde won 1st prize with unanimity of the jury in the Concours International Martine Géliot in Paris/Fontainebleau. At the prestigious 11th USA International Harp Competition in Bloomington in 2019, she won the special prize for the best performance of the Concierto de Aranjuez on top of the Bronze Medal. Mathilde is supported by the non-profit organisation SWUK, of which she is a laureate in 2022. Starting in the 2022-2023 season, Mathilde is solo harpist of the Residentie Orchestra in The Hague. She has already gained orchestral experience at La Monnaie and the Schleswig-Holstein Festival Orchestra. She also performs regularly with the HERMESensemble for contemporary music and the ensemble I Justiniani. Mathilde is a regular guest at the Arte Amanti festival and has played recitals for Camac, Middagconcerten Antwerpen (Young Masters) and the Kathedraalconcerten Brugge. Mathilde regularly performs chamber music in duo with her sister Emma who is a harpist as well. Together, they explore duet repertoires from John Thomas to Karlheinz Stockhausen. They performed in several venues, including Bozar in Brussels and Concertgebouw Brugge.