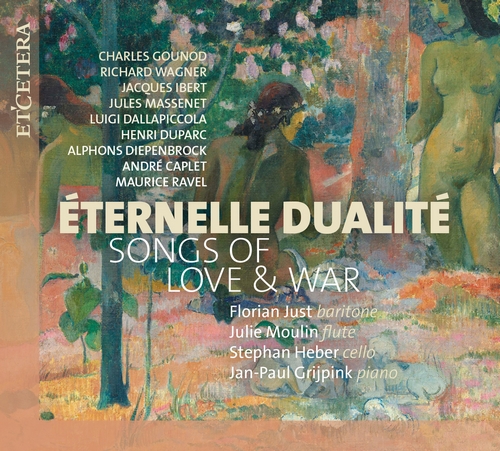 Maurice Ravel:
Chansons Madécasses
Love and war: those two opposites seem irreconcilable, but often have their roots in a similar existential need - our everlasting search for spiritual companionship.

In both states, elements of the other are found, complement each other, suppress each other or merge with each other: in patriotic zeal, in bellicose jealousy, in passionate glorification, in ruthless appropriation, in tender cruelty, in fateful fraternization, in devastating separation. This CD goes on a journey into the realms of those great emotions that define our being and actions so strongly.

The idea for this CD came to me years ago when I wanted to include Ravel’s Chansons Madécasses in a programme. The unusual cast of voice, piano, cello and flute is rarely found in other compositions; when I was looking for suitable pieces, it quickly became clear that I had to search further in French music. After I had discovered Caplet’s Viens! Une flute invisible for voice, flute and piano and Massenet’s Élégie in the arrangement for voice, cello and piano, it was clear where my searching would lead me. It was also clear that on this search in ‘Fin de siecle’ musical France, one could quickly lose oneself in the sweetly soporific mode of the ethereal shepherd’s flute music. Variety was necessary, not only in terms of the emotional character of the songs, but also in instrumentation. I would ask my former fellow student and talented arranger Wijnand van Klaveren for help. With flute and cello on my mind and with fresh ears, I travelled back to the greats of Mélodie. Duparc, Fauré, Gounod, Debussy, Poulenc. With the latter, unfortunately, it quickly became clear that this would lead to a dead end. The publisher forbids any adaptation of the original. His music will not be free of rights until 2038. But Duparc and Gounod helped us out of the misery. Their piano accompaniment is so melodic that an arrangement for our group was a must.

We then took three outsiders on board for our journey: Dallapiccola, with his fascinating view of the Chanson de Roland (The Song of Roland), Wagner, who surprisingly set Heinrich Heine’s The Two Grenadiers to music in a French adaptation (many thanks for this tip, dear colleague Tim Kuypers!) and Diepenbrock, who first found his musical language through Wagner and later through Debussy.

Together with Ravel’s Aoua, these three unleash the storm that rages, shakes and provokes this programme, bringing unity into duality.