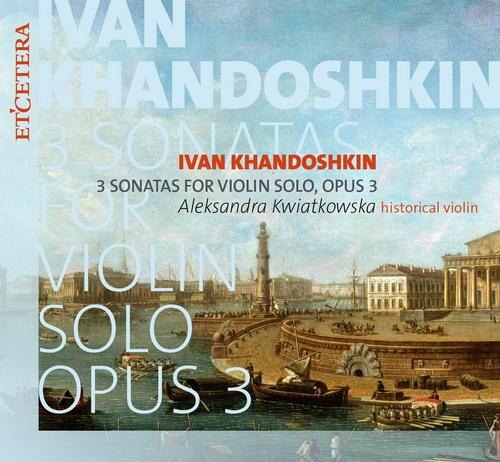 Etcetera - KTC 1772
Kompozytor
Ivan Khandoshkin (1747-1804)
Wykonawcy
Aleksandra Kwiatkowska, historical violin
Sonata Marcia No. 1 in G minor, Op. 3
Sonata No. 2 in E-flat major, Op. 3
Sonata No. 3 in D major, Op. 3
Khandoshkin was a violinist and composer of Ukrainan-Cossack origin during the Russian Empire. Born in the Ukrainian village Perevoz in 1747, he grew up in a musical family. At the early age, he was introduced to the violin, gudok (traditional string instrument played with the bow) and balalaika instruments (Russian guitar). Local nobility sent him and sposored his violin study under the direction of the famous Giuseppe Tartini in Italy. Later he received a professional musical training from famous Italian musicians at the court of Catherine’s the Great and soon became one of her favorite violinists. When Khandoshkin was only 17, Catherine designated him for the teaching position at the newly opened Imperial Academy of Arts in Saint Petersburg. Khandoshkin led many other functions on the court. He was a Kapellmeister of the court orchestra, soloist, chamber musician, and director of the Knipper Theater. Khandoshkin was also known for being passionate about Russian traditional music. Most of his compositions are based on Russian folk songs. He wrote several collections of the Variations on the Russian Songs, and was also known as a talented improviser not only on violin but also balalaika and gudok instruments. His musical talent gained recognition among nobility and common people. According to the stories of his contemporary witnesses, Khandoshkin was seen performing and improvising in the middle of street markets. Despite his fame in youth, the composer died in poverty in 1804.

ALEKSANDRA KWIATKOWSKA Aleksandra Kwiatkowska (1991) is a Polish violinist based in the Netherlands. In 2021, she graduated with a masters in Baroque Violin studies with a distinction for the artistry under the direction of Kati Debretzeni and Walter Reiter from the Royal Conservatoire The Hague. In 2015, she graduated her modern violin studies from Fryderyk Chopin University of Music in Warsaw under the direction of Julia Jakimowicz-Jakowicz, Jakub Jakowicz and Magdalena Szczepanowska. As a violin soloist and chamber musician, Aleksandra took part in concerts and festivals across Europe, Indonesia and the USA. In March 2020, she was a soloist in the Alfred Schnittke Moz-Art la Haydn concerto together with the Orchestra of the Eighteenth Century and students of the Royal Conservatoire The Hague. As a modern violin player, she successfully took part in international solo and chamber music competitions. She was for instance a semi-finalist of the XXII Johannes Brahms Competition in the violin solo category in Pörtschach (Austria), won the third prize with her piano trio in the V International Academic Music Competition Chamber Music in Jurmala (Latvia) and was a finalist in the XVIII Kiejstut Bacewicz International Music Competition in Łód´z (Poland) together with her piano