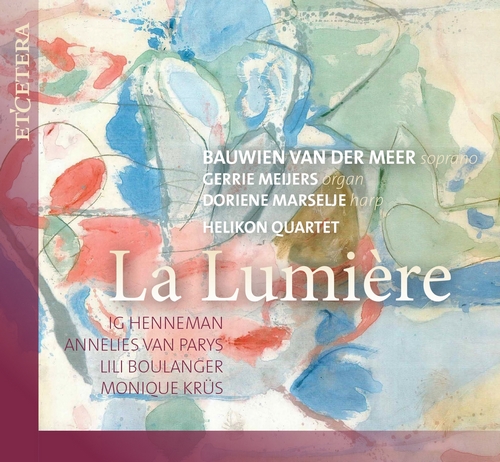 Monique Krus:
Je vis, je meurs
Soprano Bauwien van der Meer, the driving force behind this programme, asked Annelies van Parys to reorchestrate one of her works so that the organ could play an important role in it. Van Parys originally wrote her Medea in 2021, a commission from the Wonderfeel festival, for soprano, clarinet and string quartet; here it is rearranged for soprano, organ and string quartet. The challenge in this re-instrumentation lay principally in the replacement of the clarinet, as it launched and set the tone of Medea’s 15-minute monodrama with a sensitive lullaby a mood is very different from the usual depiction of Medea as a vengeful sorceress and brutal child murderess. The work also integrates an increasing focus on the female perspective that is very much lacking in male-oriented Greek myths. Van Parys’ drama ends with the same lullaby and portrays Medea as a loving mother who wants to protect her children from their humiliating future, having been disowned by Jason, Medea’s former husband. Medea had been in love with Jason and had helped him win the Golden Fleece on the condition that they would then marry. Ten years later, Jason decided to rid himself of Medea so that he could marry the daughter of the king of Corinth: he wanted to become his heir and later king himself. Medea took her revenge by killing not only the bride-to-be and her father but also her own sons. It is not revenge that reigns supreme In the harsh exclamations, penetrating multiphonics, harrowing strings and strikingly lyrical passages that Van Parys uses in this extended lamentation, but Medea’s doubt and despair; the music portrays her not as a vengeful ex-wife but as a loving mother who, despite her grief, does what she thinks is best for her children.