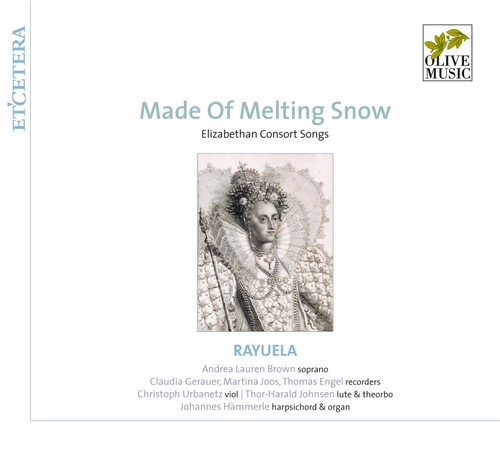 Francis Pilkington (1562 – 1638):
Diaphenia, like the daffdowndilly 02:15
Death and tears, despair, melancholy, adoration and piety, but also love and desire, joy, hope, and bliss – the themes of life provide the topics of the sung music of those times. Musicke of Sundrie Kindes, Songes of Sundrye Natures,... The titles of the English music publications (as well as their orthography) from around 1600 already hint at it: songs and instrumental pieces, but also lyrics, themes and moods – all of them can be sundry, i.e. of varying type, there are no norms regarding form or content. And also the typical ensemble of those times can by no means be standardized. In the so-called broken consort – as opposed to the whole consort, which usually referred to an ensemble made up of only viols – a representative of each instrument family was united: wind, string, plucked and keyboard instruments could be combined in various constellations. William Byrd was, without a doubt, the master of the consort song, one of the most important genres of the time. He published three collections of consort songs, including the Songs of Sundrie Natures in 1589. This was the sequel collection quickly published after the very successful Psalmes, Sonnets & Songs of Sadness and Pietie (1588). Songs for devotion in private were clearly in high demand in the England of Elizabeth I, both by followers of the Reformed Church as well as Catholics. Music which offered solace in times of anxiety. Many of these songs therefore have an underlying mood of grief and at the same time express a hopeful devoutness.

RAYUELA was formed in 2004 as a result of the close cooperation between Claudia Gerauer, Martina Joos and Thomas Engel together with other musician friends. The members of RAYUELA completed their degrees at leading European music academies (Zurich, Vienna, Basel, Trossingen) and have been active internationally as members of various ensembles for Early Music.