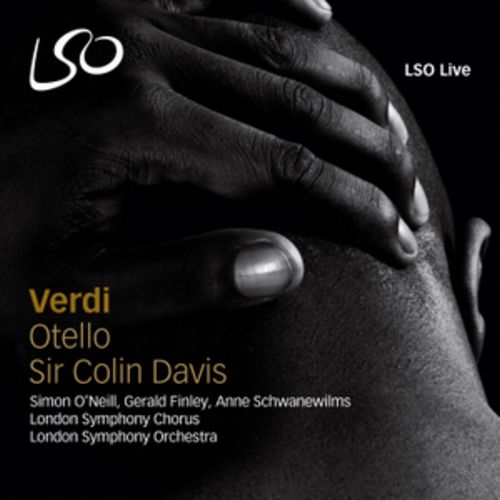 Sir Colin Davis' eagerly anticipated recording of Verdi's Otello is released on the 10th anniversary of the LSO Live label. Opera has always formed an important part of the label's output. Among Sir Colin Davis' greatest triumphs on LSO Live have been his award-winning recordings of Berlioz and Verdi's final opera, Falstaff. Falstaff was released in 2004 and won a GRAMMY® Award for Best Opera. For the title role, Davis is joined by one of the world's most exciting young tenors. New Zealander Simon O'Neill stepped in at short notice, making his debut in the role, delivering what can only be described as an astonishing performance. The villainous Iago is played by Gerald Finley and Otello's wife Desdemona by Anne Schwanewilms. Otello, which was premiered in 1887, marked a significant evolutionary development in Italian opera and is widely regarded as one of the great operatic masterpieces.

'Gerald Finley gives a masterful account of the part (Iago) ... the chorus is exceptionally precise and expressive, the playing is alert and sensitive to drama and text.'

Colin Davis gets the LSO, in shattering form, to play chords like cannon shots. The two male leads are superb: Simon O’Neill is the most complete Otello since Domingo, and some of his grandest passages are deeply stirring; Gerald Finley’s debut as Iago is also a great reading – the most chilling I have ever heard.BBC Music Magazine

'Colin Davis gets the LSO, in shattering form, to play chords like cannon shots. The two male leads are superb: Simon O’Neill is the most complete Otello since Domingo, and some of his grandest passages are deeply stirring; Gerald Finley’s debut as Iago is also a great reading – the most chilling I have ever heard.' BBC Music Magazine

‘the whole thing just feels so alive and in the best sense ... the dramatic shape he [Davis] makes is so constant and clear and engaging, it just feels like everyone involved is participating wholly in the excitement of this piece of music theatre ... It has that feeling of the excitement of discovery for him [O’Neill] and throwing himself at the part but with complete control and musicianship, and you couldn’t have a better pairing than him with Gerald Finley who is a tremendous singing actor and whose Iago is scary. They’re both absolutely terrific ... The whole thing is tremendous. What you want in a production like this is the sense of it being live with the music theatre being generated on all sides and feeding back in and there’s such a presence about it. A wonderful recording and a wonderful testament of and to this opera and performance. It must have been wonderful to be at the Barbican and thank God you can get it on CD. And it does sound fantastic – the dynamic range they’ve captured is tremendous’ BBC Radio 3 CD Review

‘a spellbinding account, thanks to O’Neill, Anne Schwanewilms’s Desdemona and Gerald Finley’s Jago, but above all to Colin Davis’s warm, urgent but never forced interpretation’ The Observer (UK)

‘Davis’s electrifying conducting keeps the temperature high throughout this gripping performance, recorded live at the Barbican in 2009. Simon O’Neill makes a powerful and confident debut in the title role, well matched against Gerald Finley’s subtle and sneaky Iago ... front-runner in the field’

‘immensely powerful ... Unlike Domingo, O’Neill sings the repeated A flats of Dio mi potevi as Verdi demands and throughout his clarion tone is thrilling. But the heroes are Gerald Finley, a supremely malignant Iago, the superb orchestra and chorus, and Colin Davis, who makes the terror and pity in the opera almost unbearably vivid’ Sunday Times (UK)

'an insightful and revealing account ... The strong cast offers the virile tenor Simon O’Neill as Otello, the rich-voiced soprano Anne Schwanewilms as Desdemona and the compelling baritone Gerard Finley as an uncommonly intelligent Iago. In his lean, crackling performance Davis offers an alternative to the more typical approach of Verdi conductors who favor richer, darker orchestral textures and weightier voices for Otello and Iago. [The LSO] play brilliantly for him ... For devotees of the opera it will be a must' New York Times (US)
James Mallinson producer; Jonathan Stokes and Neil Hutchinson for Classic Sound Ltd balance engineers; ; Recorded December 2009, Barbican, London; DSD (Direct Stream Digital) recording