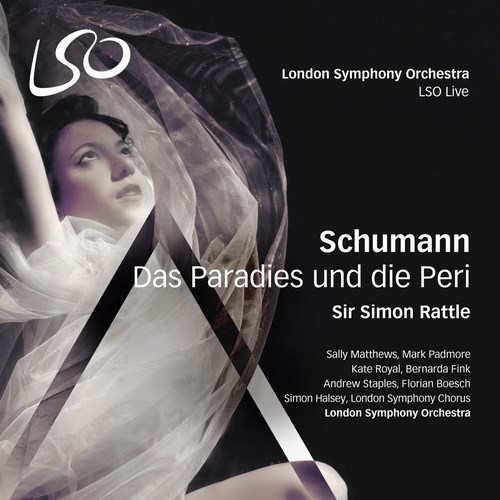 Das Paradies und die Peri
Op. 50;
In his debut recording on LSO Live, Sir Simon Rattle conducts a stunning performance of Schumann’s rarely recorded Das Paradies und die Peri featuring a superb line-up of soloists. Rattle is well-known for being a champion of this rarely-heard work, and yet this is the first audio recording he has made of it. Here it is brought to life by the LSO under his baton, and the starry line-up makes the best possible case for Schumann’s great oratorio. Sir Simon Rattle says of the piece, ‘It’s the great masterpiece you’ve never heard, and there aren’t many of those now…. This is just something else, a complete anomaly if you think about it. In Schumann’s life it was the most popular piece he ever wrote, it was performed endlessly. Every composer loved it. Wagner wrote how jealous he was that Schumann had done it and he’d stolen this subject that he wanted to do and how extraordinary it was… It was a playground for composers and the piece was extraordinary.’ Based on an episode from Thomas Moore’s epic poem Lalla Rookh, itself inspired by exotic, colourful tales taken from Persian mythology, Das Paradies und die Peri reflects the 19th-century craze for all things Oriental. Completed in 1843, Schumann’s ‘secular oratorio’ tells how the Peri, a legendary creature, was expelled from paradise and follows her quest to redeem herself by giving the gift that is most dear to heaven. Writing about the work in a letter to a friend, Schumann said, ‘at the moment I’m involved in a large project, the largest I’ve yet undertaken – it’s not an opera – I believe it’s well-nigh a new genre for the concert hall.’ Conceived in three beautifully sequenced parts, it is unlike any oratorio of Schumann’s day. Sustained melodic invention is clear throughout, with Peri’s high C in the finale forming a deftly timed climax. Soprano Sally Matthews gives a soaring performance as Peri, showcasing Schumann’s imaginative and emotive vocal writing, and there are superb supporting performances from Mark Padmore, Kate Royal, Bernarda Fink, Andrew Staples and Florian Boesch. This release is the major priority of the autumn. A promotional trailer with Sir Simon Rattle and full collection of photography will be available to accompany the release and marketing activity.
Live recording from January 2015