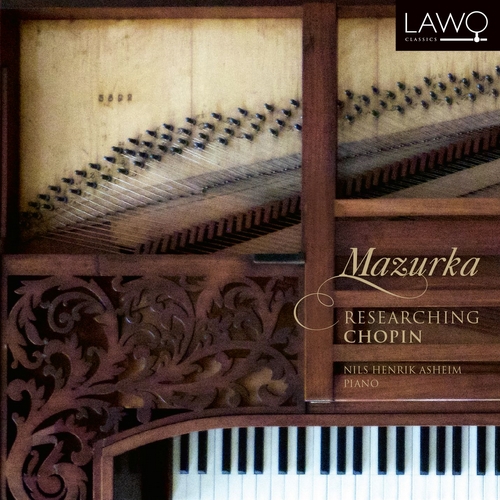 Mazurkas
Three years ago, Nils Henrik Asheim released "Mazurka – Remaking Chopin", a collaborative project with Gjertrud's Gypsy Orchestra. This release, which was awarded with Spellemannsprisen, the Norwegian Grammy, explored Chopin's Mazurkas, creating new versions with traditional music as its most important influence. The new release has "researching" in the subtitle, as Asheim has been searching for Chopin in a historical instrument – a Collard & Collard square piano from the 1830s. He fell in love with the instrument during the last recording, at Ulefos Hovedgaard. The Collard & Collard piano offered new possibilities in the very playing of Chopin, and new insight into how his music sounded originally.

Nils Henrik Asheim (1960-) is educated at the Norwegian Academy of Music and Sweelinck Conservatory in Amsterdam. His work encompasses works for chamber ensembles, symphony orchestras, choirs, theatre, electronic music, and happenings in public places. He has been the recipient of the Arne Nordheim Composer's Prize, the Lindeman Prize, and the Edvard Prize. Moreover, he has, on two occasions, been awarded Spellemannsprisen, Norway's Grammy. After having established himself as one of Norway's leading composers, Nils Henrik Asheim has broadened his performance career both as organist and pianist. He is known for his original improvisational style on the church organ. Since September 2012, he has held the position of organist in the new Stavanger Concert Hall.