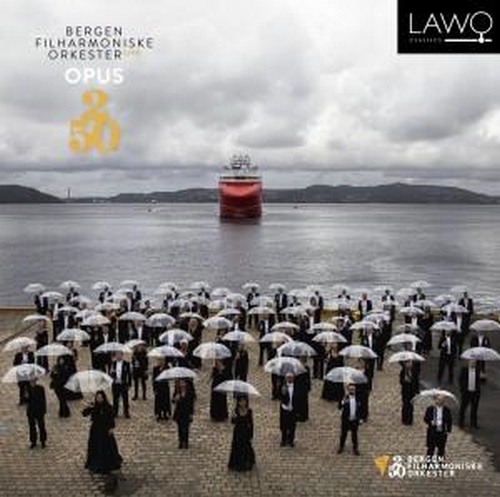 Orjan Matre, Knut Vaage, Ketil Hvoslef, Henrik Hellstenius, Asbjorn Schaathun, Lasse Thoresen, Olav Anton Thommessen
Wykonawcy
Bergen Philharmonic Orchestra
Concerto For Viola And Orchestra
Shadows And Shields
Horns In Landscapes
Concerto For Timpani And Orchestra
In celebration of its 250th anniversary, Bergen Philharmonic Orchestra has undertaken an unprecedented project of commissioning and premiering more than 20 new compositions. Contemporary music has always been central to the orchestra's tradition, which included performing the works of Haydn, Mozart and Beethoven while the ink was still fresh. OPUS 250 is the name of this project dedicated not only to the composers represented, but also to the musicians of the orchestra, and particularly its own soloists. In fact, the four works presented on this CD are the result of initiatives taken by the soloists themselves to inspire and collaborate with Norwegian composers with whom they particularly identify. The greater OPUS 250 endeavor also encompasses new works by esteemed Norwegian composers such as Orjan Matre, Knut Vaage, Ketil Hvoslef, Henrik Hellstenius, Asbjorn Schaathun, Lasse Thoresen and Olav Anton Thommessen. They are joined by stellar international counterparts, including Peter Eötvös, Michel van der Aa, James MacMillan, Sebastian Fagerlund, Alissa Firsova, Lera Auerbach, Per Norgard and Einojuhani Rautavaara. The OPUS 250 project is an exemplification of Bergen Philharmonic Orchestra's commitment to the preservation of its tradition, while investing in the future of symphonic music.