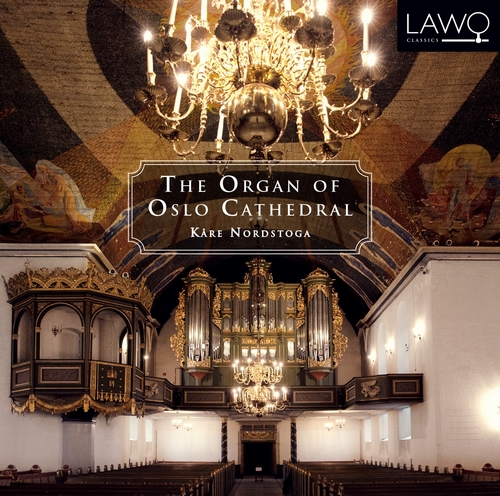 The main organ in Oslo Cathedral was built by Norwegian organ builders Ryde & Berg in 1998. The organ facade is the original one from the Baroque organ of 1727 built by the Danish organ builder Lambert Daniel Kastens, who studied and worked with the famous North German organ builder Arp Schnitger. On this CD, organist Kare Nordstoga plays a variety of famous works by Bach, Grieg, Reger, Gounod and others, to showcase this beautiful instrument.

Kare Nordstoga (b. 1954) studied at the Norwegian Academy of Music under Soren Gangflot, Bjorn Boysen, and Kaare Ornung, among others. Following his debut concert in 1978, he continued his studies under David Sanger in London, and he was for a time organist at Ullern Church, before coming to Oslo Cathedral in 1984. He has also been associated with the Norwegian Academy of Music, where he was appointed professor in 1994.

As cathedral organist at Oslo Cathedral, Nordstoga frequently performs a large repertoire, which has included two popular concert series with Bach's complete organ works. His recordings include the organ music of Bach, Brahms, Franck, Widor, and Liszt, all of Bach's violin sonatas recorded on the cathedral's chancel organ in collaboration with violinist Geir Inge Lotsberg, as well as several recordings of Norwegian organ music.

Nordstoga is an active concert organist. In recent years he has been soloist with the symphony orchestras of Oslo, Bergen, and Trondheim, and he has been invited to organ festivals abroad, including Aarhus, Notre Dame in Paris, and Musashino Cultural Center in Tokyo. In 2006 he was awarded the Lindeman Prize for his active contribution to musical life.