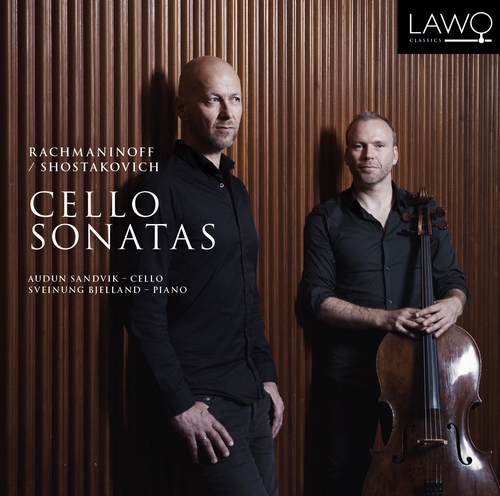 Shostakovich:
Cello Sonata in D minor, Op. 40
The two performers, both in frequent demand internationally as soloists and chamber musicians, teach at the Norwegian Academy of Music. They have performed as a duo for many years, and this is their first CD release together.

We know that our seafaring ancestors cultivated a strong tradition of singing. And Russian singing, especially in a religious context, is a renowned hallmark of the country's rich culture. Both composers featured on this album were partial to the human voice.

Many regard the cello as one of the instruments best able to reproduce the human voice. It is tempting to presume that both Rachmaninoff and Shostakovich were motivated by the cello's matchless range of expression when each wrote his powerful sonata and, mind you, with the piano as wholly equal partner. Each was considered one of the most outstanding piano virtuoso sof his generation and knew his instrument through and through.

Shostakovich's cello sonata (opus 40) was his first instrumental sonata. Rachmaninoff's (opus 19), on the other hand, was his last in this genre and his last chamber music work altogether. The sonata was overshadowed by the immense success of his second piano concerto, which had been premiered only one month earlier. We find many musical similarities between the two works. Following this glittering period, Rachmaninoff devoted himself to pure piano music, and to larger works for choir or orchestra.