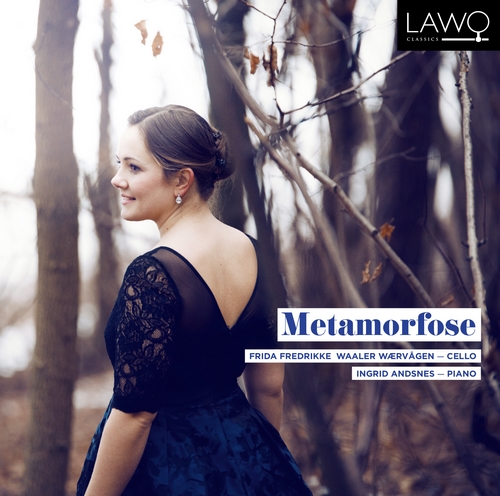 Edward Grieg:
Sonate for cello og piano, Op. 36
The music on this CD embodies some of the core works of the Norwegian cello repertoire and spans a time period of 100 years. At the centre is Grieg’s cello sonata from 1883. It is still the best known internationally, but in its wake have come a number of beautiful new compositions.

In Monrad Johansen’s “Suite”, Sparre Olsen’s “Metamorfose” and Sommerfeldt’s “Mini-suite” we can glimpse the influence of Grieg’s style, while Nordheim’s “Clamavi”, which with its strong musical expression already graces the repertoire of an increasing number of cellists, has a completely different tonal language.

Frida Fredrikke Waaler Warwagen is a Norwegian cellist with a long and impressive list of accomplishments. She began lessons at Horten Music School at age five and later studied with professors Aage Kvalbein, Truls Mork, Frans Helmerson and Torleif Thedéen. She is now a freelance cellist based in Oslo and in frequent demand as chamber musician and substitute principal cello with Norwegian orchestras, in addition to serving on the faculty of “Musikk pa Majorstua” as lecturer in cello. Frida Fredrikke plays a Nicolas Lupot cello from 1823, kindly lent to her by Dextra Musica.

Ingrid Andsnes has established herself as one of Norway’s leading pianists. The vigour of her playing and her exceptional ability to communicate have made her all the more endearing to her audiences. In 2015 Ingrid released her debut solo CD with Beethoven’s “Diabelli Variations”. It received glowing reviews and served as a springboard to a concert at Carnegie Hall, where she received a standing ovation.